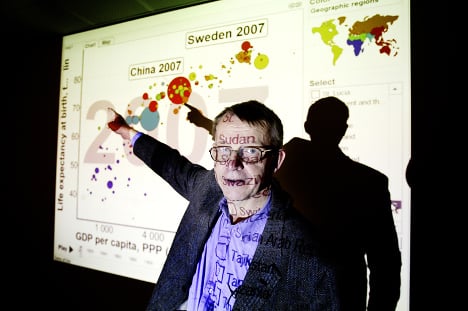 I was hardly alone in my shock and sadness upon learning earlier this week that Sweden – and the world – had lost one of the most powerful and engaging minds of the last few decades.

Hans Rosling had a unique gift to make statistics and numbers tell stories that were immediately graspable to the masses. But more than that, he had an unwavering commitment to what he often referred to as a “fact-based” worldview, where people made decisions based, not on assumptions and preconceived notions of the truth, but on more complete, accurate information and data.

He truly was a legend in his own time, his entertaining and enlightening lectures having spread online, making him the most unlikely of celebrities. Being a humble, unassuming – if not slightly nerdy – bespectacled professor of public health from a small country on the fringes of Europe isn’t normally a recipe for being a global super star.

But as anyone who has seen one of his lectures can tell you, Hans Rosling was exceptional in every sense of the word. He was the ultimate myth-buster, someone who took pleasure in turning conventional wisdom on its head.

And that’s why his all-too-early passing from pancreatic cancer at a mere 68-years-old is so hard to accept. He had so much left to teach us. In this current climate of ‘alternative facts’, skepticism, and mistrust, Rosling’s commitment to a “fact-based” understanding of the world we live in will be especially missed.

I had the good fortune of interviewing Hans Rosling back in 2015, in what turned into a rollicking and riveting 90 minute conversation about a dizzying array of topics – from the Cuban Missile Crisis to ebola; from alcoholism to migration to birth control, statistics, and Swedish values.

It was a whirlwind, but one that left me feeling smarter, humbled, and in slightly in awe from what was supposed to be a relatively simply assignment: profiling Rosling for a sponsored article series exploring Sweden’s place in the world.

Distilling the interview into a coherent and digestible article was no small task – it felt like a waste to have so much material from such an amazing interview that would never see the light of day.

The day after his passing, I had a look through my old files and managed to find the transcript from my interview with Hans Rosling, which took place on February 11th, 2015.

We met in the Stockholm offices of Gapminder, the foundation Rosling set up to develop and distribute material “to dismantle misconceptions and promote a fact-based worldview”.

Anyone who attended the 2015 NFGL Kick Off may recall a lecture by Rosling’s daughter-in-law, Anna Rosling Rönnlund, co-founder of Gapminder, in which she presented the Dollar Street Project, a then new project using data and images to illustrate income differences and ways of live all across the world.

After a brief tour of the space – which appeared to be a converted 3-bedroom residential flat – we sat down over coffee in the kitchen, and Rosling let loose. I felt like I was simply along for the ride of my life.

Below a few quotes that stuck with me and which I feel should be shared.

Hans Rosling on travel and understanding

“Traveling is over exaggerated as a means of understanding the world. Because you still have so many concepts, you just confirm your preconceived ideas.”

“We can never base our understanding of the world on an activity based on everyone meeting everyone. You will never learn the contour of South American on the map by traveling on a boat around South America. We need to have abstract representations.”

“If we had to go somewhere to understand things then no one would understand anything about history because we can’t go there.”

“Some sorts of travel just makes things worse because you don’t understand the structures that lie behind what you observe. Visiting someplace in and of itself doesn’t guarantee understanding.”

“The whole idea with Gapminder is to build an understanding of the world without having to travel.”

“Of course, traveling does help. But one of the struggles we have is that in spite of traveling, many people still don’t get it.”

Hans Rosling on Sweden and values

“My mother told me that when her best friend, who was 14 years old in 1935, got pregnant because she was raped by her father. Then the priest of the church came home and blamed the mother.”

“The Sweden I grew up in was ugly compared to this.  I had another friend who was made pregnant by her father. Incest wasn’t discussed in public.”

“We live in this time. Time is more important than place. Our values are not place based, they are time based.”

“Sweden and Swedishness is a construct which has a lot of flaws.”