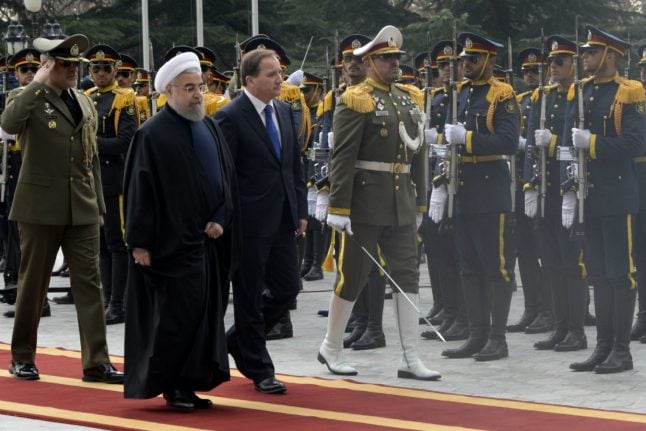 File photo: Jenny Petersson/TT
Following a meeting with Rouhani, Löfven told reporters that improved trade with Iran would be beneficial for the country's development and people, as well as for Swedish business.
“It will create jobs in Sweden,” said Löfven to Swedish reporters.
The PM also said that he had raised the issue of human rights, though he declined to comment on the exact nature of their discussion.
“We raised the issues that are relevant,” said Löfven.
These issues include the situation of Swedish residency holder Ahmadreza Djalali, who is currently under arrest in Tehran and faces possible execution.
At a joint press conference earlier today, where no questions from journalists were allowed, Rouhani thanked Löfven for accepting the invitation to visit Iran.
“We have broadened our dialogue on regional issues as well as human rights. We have discussed the situation in Syria and Iraq, and Iran's relationship with other regional powers, such as Turkey and Saudi Arabia,” said Löfven.
The speeches given by the two leaders were filled with conventional courtesies, with Rouhani praising, among other things, Sweden's moderate relation with Iran during the period of sanctions against the country.
Trade was also discussed during the visit, with many Swedish industries harbouring hopes of increased export to Iran. A parallel business delegation, led by Trade Minister Ann Linde, is also present in Tehran.
Transport, the environment, mining, information technology and manufacturing are all areas in which Rouhani hopes to improve links between the two countries.
“Both our countries are determined to increase trade back to the levels it was at prior to the sanctions,” said the Iranian president.
In a nod to EU governments, Rouhani also said that European banks and businesses should be supported in their efforts to trade with Iran, in accordance with the nuclear agreement of 2015 [between Iran, the US, the five permanent members of the UN Security Council and the EU].
Difficulties with financing remain a major obstacle to doing business in Iran, with US sanctions affecting bank transactions still in place.
Rouhani also mentioned the conflict and humanitarian situation in Yemen, where Iran and arch-enemy Saudi Arabia support opposing sides.
The Yemeni population is under severe pressure with an urgent lack of available food and medicine.