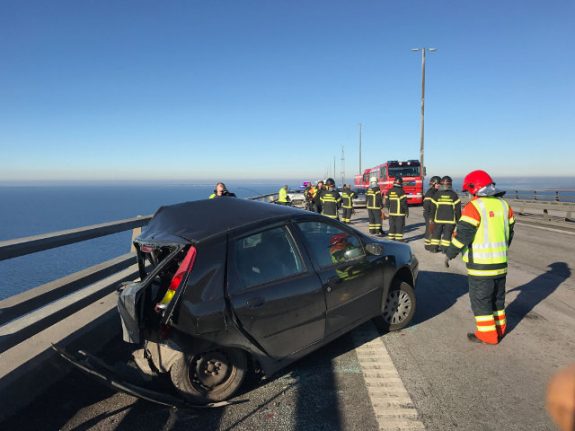 An image of one of the cars damaged in the collisions. Photo: Sanna Holmqvist/Øresundsbron

“We characterize it as the biggest accident until now,” Ulla V. Eilersen, security head of the Öresund Bridge Consortium which owns and runs the bridge said in a press release.

Emergency services were called to the scene shortly before 7.45am, and the bridge was closed soon after. Both Swedish and Danish police were involved in assisting at the scene, and it took several hours before the bridge re-opened.

“The bridge is open again,” Stephan Söderholm from Skåne police told The Local at 10.30am.

“There were two large accidents and one smaller one,” he added. When police and emergency services arrived at the scene of the first accident they discovered several crashes. Police drew up reports on two serious accidents, and one less serious collision in which there were no injuries.

It is understood the accident did not affect the railway part of the bridge.

The cause of the collisions is still unknown, though there are no suspicions of any crimes. It is possible that the crashes were caught on camera, as CCTV cameras are placed along the bridge at 100 metre intervals.

The 7.8 kilometre bridge connecting Malmö and Copenhagen was built in 2000 and became internationally famous in Nordic Noir series 'The Bridge'. Around 7,424,000 cars drove across the bridge in 2016.