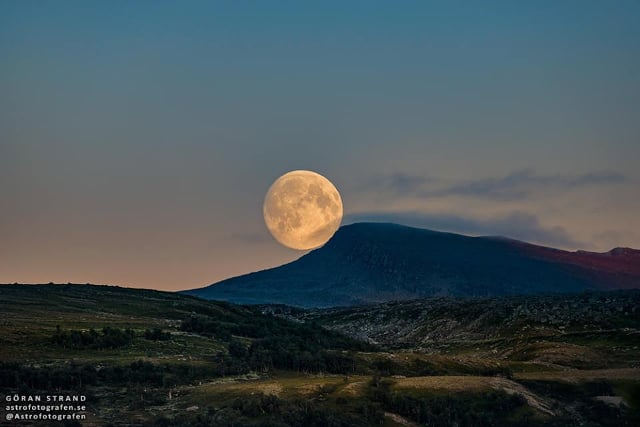 Göran Strand's shot of Earth's natural satellite was chosen as the best astronomy photograph of 2016 by Swedish magazine Populär Astronomi.

“I am very honoured to have one of my photos chosen as best astro photograph of 2016,” he told The Local.

“The photo was taken on August 16th last year, near the small village of Handöl in Jämtland. It was a calm and warm late summer evening and I had planned to take photos of the full Moon rising,” he explained.

As soon as Strand saw the special way the Moon appeared that evening, he decided to take up a new position to shoot the picture.

“Just after the top of the Moon was above the horizon I saw that it would touch this beautiful mountain formation, and re-positioned myself to have the Moon touching the mountain top in a way that it looked like it was about to roll down the hill.”

This is not the first time Strand has been honoured by Populär Astronomi. In 2013 one of his other pictures, this time of the Sun, was named best of the year.

And capturing images of space has long been a passion for the Swede:

“I've been working as a photographer since 2002 and my passion for photography and astronomy has always been a big part of my life.”

His work has been shown by TV channels like MSNBC and Sweden's SVT. Rock band Coldplay even used a stop-motion movie he shot of the Aurora Borealis from Östersund in their TV-special, “Ghost Stories”.