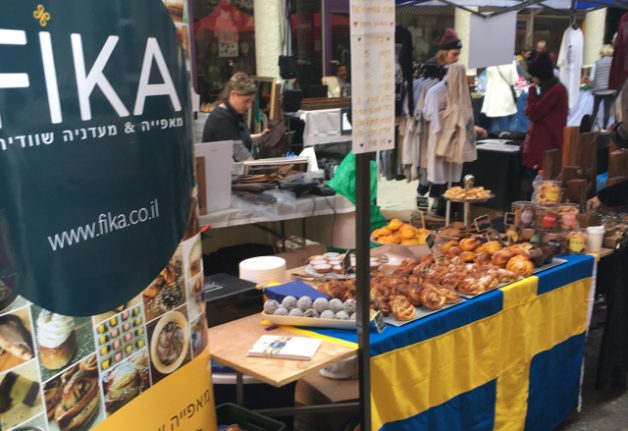 What prompted you to open up a Swedish bakery called FIKA in Tel Aviv?

I am actually a TV producer, not a baker. I was born in Sweden and lived there till I was 30. Ten years ago, I moved to Tel Aviv, because I think it is a really cool and liberal city. Before I worked with TV in Sweden and moved to Israel to continue to work with TV.

Then, a year or two ago, I got for different reasons a bit tired of the media business and was looking to do something different. So, I met an Israeli women that came back from Sweden, where she had worked as a baker. She came back to Israel and did not know what to do here. I thought we could do something together, because I also did not know what to do and liked baking at home. We started to think about an idea, but then she got a bit of cold feet and also she was moving with her family. I was stuck with this idea of doing Swedish bakery in Israel, but I had no baker.

I kind of didn’t pursue the idea any more until about a year ago. The idea was still stuck in my head and I thought, maybe I could do it myself. So I started to watch YouTube tutorials on Swedish baking, read books and started experimenting at home. I got better and better, so I decided to just put up a website and a Facebook page and put up some pictures and prices. I thought “Fika” was a good name, kind of catchy and easy to say for Israelis.

But I did not really think it would lead to something. Two days after I put up the site, people called and ordered, which was a bit unexpected but very fun. Since April I’ve been baking every day for people. In the beginning, I only baked on order, so people called and picked the order up the day after. Two months ago, I started to also work outside on a market and I’m looking up for a place to open up a real bakery where people can sit down and have a fika. Fika is a Swedish term which means to have coffee and something sweet. Photo: Michael Rothschild

What makes Swedish pastries so special for you?

I like baking, but not everything. I wouldn’t open a bakery here with croissants or Israeli style of pastries. It is a connection to Sweden. I do miss it, and it gives me a chance to have one foot still in Sweden. And of course, it is really tasty! I think it’s like a hidden culinary thing. The Swedish bakery tradition has not really been exploited until about five to ten years ago, when people started baking Swedish in New York, London and even in Singapore. I guess it is like an ongoing trend that I also picked up. Tel Aviv is a trendy city with a lot of people coming from all over the world. The Swedish baking has a really high international standard, definitely not less tasty than the French or the Austrian for example. It’s as good or even better.

You want to bring the Swedish concept of fika to Israel. What makes fika so unique?

I think the concept of fika is not so unique. People here actually do a lot of fika, they just don’t know there is a name for it. The meeting and socializing together over a coffee to break the daily routine kind of fits the lifestyle here as well. People are looking for better quality of life and improved social rights. They are always meeting up in cafés, so I think it just fits to the culture here. When I explain the word to people, they find it has also some kind of meaning to them.

What reactions did you get from people, especially Israeli people?

They really like it. Many people trying for the first time are coming back again and want more. There has been coming a lot of French bakery to Israel in the last five years and lot of Israeli bakeries were inspired by the French cuisine. I think people are looking for something new, they always like new stuff here and if it’s good it kind of sticks. So far people really like the kanelbulle (cinnamon bun) and the mazarin (Swedish almond tart). They don’t understand why we use so much cardamom in sweet things. They use it a lot but not in pastries, same thing with saffron. But when they try it they really like it, at least most of them. On your menu are also Israeli/Jewish sweets with a Swedish twist. How important is it for you to combine both cultures?

If the thing grows and has a bigger crowd of customers, I think I will have to adapt a little to the local taste. So, I will get some inspiration from Israeli baking, what they are used to here. Maybe I’ll use a little bit less cardamom or something like that. Right now, I’m kind of going Swedish hard core, especially for the markets.

What was the most surprising thing you learned when opening your bakery?

The most surprising thing was that people started to order after I put up the website. Not the fact that they liked it, because it is very good. All Israelis that have been to Sweden and buy from me are happy to taste Swedish bakery here now as well. I was more surprised from my view that it got so much attention right from the beginning. I actually do less and less TV stuff which is my main profession. So, that is most surprising, that I can make a living out of it. It was more a fun thing, I am not a professional baker. But I’ve learned a lot, worked at a place for baking in the summer and have Swedish friends that help me when I have questions like: Why is the dough not rising? I’m still far away from a professional baker though.

What is your favourite Swedish pastry?

Well, I like a lot of them, that’s probably why I gained some weight since I started. I guess, I like the kardemumma (cardamom) bun and mazarin the best.

Most of my customers like kardemumma and mazarin when they taste it, I think they like everything. Saffron is a big surprise to them, but they also like that. I guess the cinnamon bun is the one that sells the best.