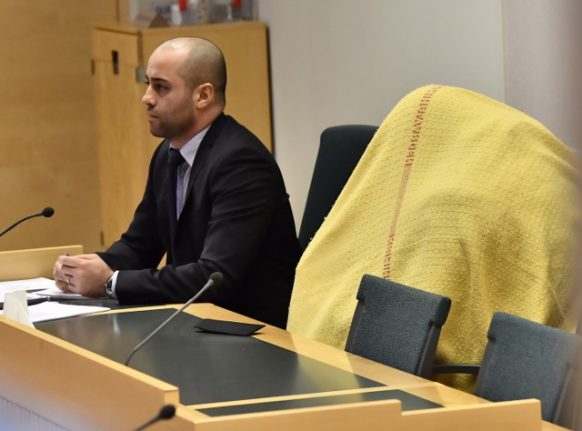 One of the suspects (right) along with his lawyer at a remand hearing in Stockholm. Photo: Jonas Ekströmer/TT

Police detained eight men in connection with the suspected network, taking one in for questioning before releasing him and arresting seven. Three of the eight have been found guilty of or have been suspected of sexual offences against children in the past.

The four men the prosecution authority asked to have remanded on Friday are accused of child pornography offences on 'probable cause' (the higher degree of suspicion according to Swedish law). One of them is also accused of raping a child on probable cause.

The men are believed to have stored and shared illegal material. Police have been investigating the case since last autumn after they were tipped off about one of the men, who had previously been investigated for allegedly raping a child.

“Additional suspects were then identified as they made use of a telecommunications service which they called. There, they discussed extremely serious sexual offences and serious violent crimes against children,” prosecutor Reena Devgun, of the International Public Prosecution Office in Stockholm, said in a statement.

Police and prosecutors used stored telecommunications data to identify and map the suspects. According to newspaper Dagens Nyheter (DN), reconnaissance and wiretapping allowed them to map a large network of men aged between 50 and 70.

One of the accused has previously been sentenced for sex crimes against boys. He was discharged from psychiatric care in 2015.

Swedish tabloid Aftonbladet reports that in their phone conversations the men discussed acquiring a soundproofed facility where they could keep children captive. They allegedly discussed plans to take a refugee child, because they believed the attention given to such a disappearance would not be as significant.