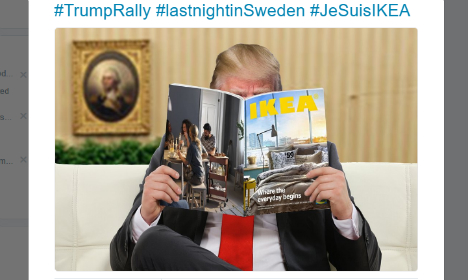 The only twist was that nothing spectacular happened in Sweden on Friday.

Twitter ran wild with speculation about what the American leader might have been referring to – the fact that it had snowed? That a large amount of reindeer had crossed the border? Or perhaps Sweden’s generous social welfare system? – and a series of hashtags sprung to life, including #LastNightInSweden and #JeSuisIkea.

The Swedish government, however, wasn’t as amused.

“Our embassy in Washington has been in contact with the US foreign affairs office to get clarification. We’re of course wondering [what he referred to],” she said.

“Let’s see if we get an answer from the embassy.”

Swedish Foreign Minister Margot Wallström appeared to be equally baffled, tweeting an extract of the country’s foreign policy declaration for 2017 which talks about Oxford Dictionaries declaring the term “post-truth” its international word of the year.

Although Wallström did not name either Trump or Friday’s mysterious incident in Sweden, she did attach the comment “speaking of which” to her tweet.