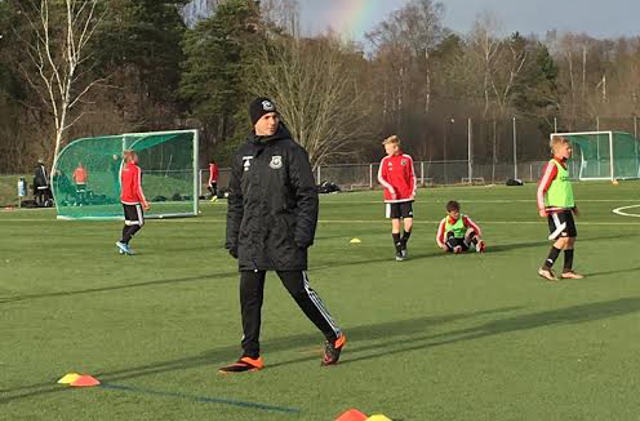 Boasting less than a handful of active players well known beyond the borders of Sweden and with few recent major international successes, either at national or club level, Swedish football is in a slump.

Enter Nacka Football Club, founded in 2015 by Joakim Orthen with an ambitious goal. To create a club providing the best football education in Sweden for young teenagers and children with big dreams.

Angulo, from Barcelona, was handpicked by Orthen and brought to Sweden, to the suburb Nacka south of Stockholm, specifically to help set up the club during the summer a year and a half ago. It's been a fast ride.

“When I arrived here we had no structure, no nothing. Now we have four teams, eight coaches and more than 60 players (born 2004-2007). The goal is to have ten teams by September,” he explains. The club's philosophy is based on Spanish methodology, a comprehensive and successful football strategy which, for example, helped Spain's national team win the Euro 2008, the 2010 World Cup and Euro 2012.

“Spanish methodology is about understanding football and how to play the ball. This means that players need to make mistakes and learn to make good decisions – that's important. In Sweden the defender takes the ball and kicks it long. In Spain you control the ball and pass it between players to have control of the game and dominate the opponent,” says Angulo.

More than the players' performance on match day that counts, though. He and the other club bosses believe that a team's behaviour off the pitch and in the training room is a major factor in their success.

The coaches also put effort into making sure that each kid on the team gets the chance to play, whether it is in training or tournaments. “Everyone is the same and has the same opportunities. We think the most important thing for the club is that the players learn and develop. Then the club develops,” says Angulo. The important thing is to have fun, says Angulo. Photo: Private

Angulo first started playing football back home in Barcelona when he was four years old, moving on to coaching at the age of 14. Today, he is one of Spain's youngest professional coaches with the highest qualifications (Uefa B, Uefa A and Uefa Pro) and has coached teams in Marseille, Andorra and Spain.

“In Sweden I am special. In Spain you're just 'one more'. Here I am the Spanish guy, people know you as the Spanish guy. My objective is being in professional football and that's easier for me here than in Spain.”

He says he feels like he is still learning, even while coaching the kids in Nacka.

“I am very happy because I think I'm growing in a good way,” he says.

“I love Stockholm, it's a super nice city. The culture that Sweden has is amazing. When you are a father you have months to be with your family, if you want to study at university you can do that for free. I think these are opportunities for the people. In Spain going to university is really expensive so you lose a lot of talent that way.”

His own future career goal is to keep working as a professional football coach, training adult competitive teams. But for now, he is firmly rooted in Nacka Football Club, leaving his competitive streak to the side while helping the youngsters grow. “With the kids the most important thing is to have fun and learn, not to win.”

Still, the aim is that this mindset is what will make their youngsters Sweden's future top footballers.

“In Sweden in football the physical work is very good, we don't care about this very much in Spain. But in Sweden they need to develop their understanding of football,” he says.

“Right now they're in a good place, they're changing to the Spanish way and I think that's good.”