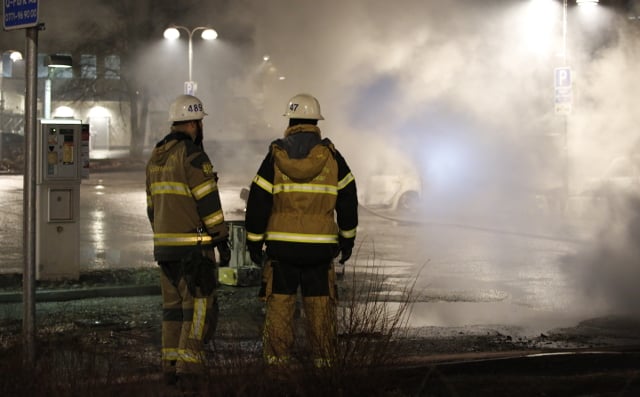 The riots started at around 8pm when police were making an arrest near the underground station in Rinkeby.

“Several people” threw rocks at the officers, according to police, who later confirmed that one officer had fired at rioters.

“But nobody has been found injured at the scene and we have checked the hospitals and there hasn't been anyone with what could be gunshot wounds,” police spokesperson Lars Byström told the Dagens Nyheter newspaper.

The unrest continued late into the night. At around 10.20pm police said that there had been a second violent riot, with seven to eight cars set on fire. An hour later they said that some stores in the area had been looted, although there were no reports on the extent of the looting.

A photographer from Dagens Nyheter said he had been assaulted by a group of around 15 people when arriving in Rinkeby to report on the unrest.

“I was hit with a lot of punches and kicks both to my body and my head. I have spent the night in hospital,” he told the newspaper.

Shortly after midnight police reported that things had calmed down in the area.

Reports have been filed on three violent riots, violence against a police officer, two assaults, vandalism and aggravated thefts, according to an update on the police's website.

Rinkeby was one of several areas which saw violent unrest in 2013, with up to 30 fires a night and several police injured by stones. It is one of 15 areas listed by police as “particularly vulnerable” in a report from 2015, however they have denied any existence of “no go zones”.