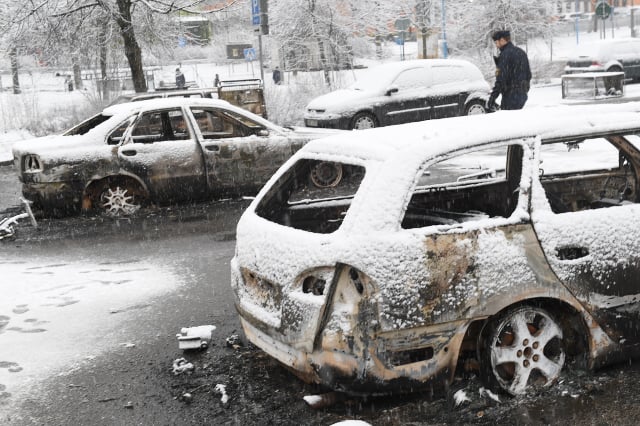 Violent unrest erupted in Rinkeby at around 8pm on Monday, including rock throwing, looting and car fires, after police were called there to make an arrest near the underground station.

The situation calmed down shortly after midnight and no further disturbances were reported, as police stepped up their presence in the area. But residents criticized police for waiting too long before clamping down on the rioters.

District Police Commissioner Jan Evensson told the Dagens Nyheter (DN) newspaper that future evaluations of the operation would have to determine its success or failure.

“If it turns out that it took too long, then we will definitely improve,” he said.

“Zero arrests in a situation like this, that is not a pass,” he conceded to the newspaper, whose press photographer was assaulted in the riots, and was asked by police to make his own way to hospital.

“If journalists and photographers can't report from vulnerable areas and count on police protection if something happens, the areas could become black holes and lead to the spreading of rumours and false information,” said Jonathan Lundqvist, chairman of the Swedish branch of Reporters Without Borders.

Rinkeby hit global headlines on Tuesday sparked by the riots coming on the back of US president Donald Trump's controversial (and untrue) comments about crime and immigration in Sweden.

The suburb is one of 15 areas listed by police as “particularly vulnerable” in a report from 2015, however police and other Swedish authorities have denied any existence of so-called “no-go zones“.

“I don't think we have such areas in Stockholm,” Evensson reiterated.

“These are areas we work in every day, every week, every month.”