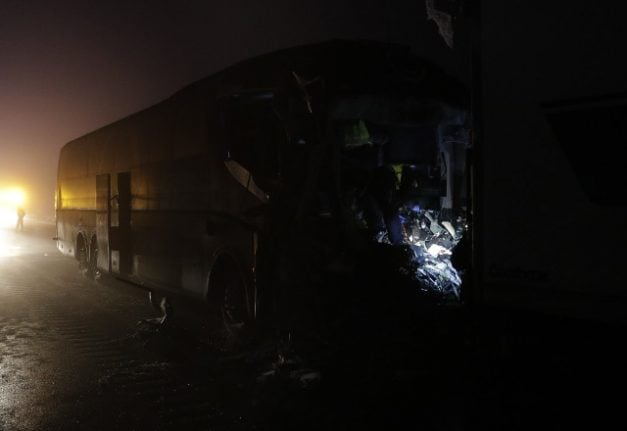 A bus damaged in the crash. Photo: Pavel Koubek/TT

The accident occurred at around 7pm on Tuesday on the E18 road between Arboga and Köping, two hours west of capital Stockholm. At least eight cars, one bus and a cement mixer were involved in the crash, according to police.

“We have several patients at the hospital in Västerås, and one of them is very badly injured,” Västmanland county council spokesperson Kjell Nylund told news agency TT.

A total of 22 people were taken to hospital following the crash, 15 of which were people with minor injuries.

Witnesses described a chaotic scene after the accident took place. According to TT’s photographer Pavel Koubek, the incident stretched across several hundred metres and the ground was slippery.

Local newspaper reports say that the bus crashed into a stationary truck, and while police would not confirm those details before completing witness interviews, they did say that most of the people injured came from the coach.

The bus was operating a service between Arlanda and Karlstad via Västerås and Örebro, and can carry up to 35 passengers and a driver.

Police noted that the scene of the accident was icy. Swedish weather agency SMHI judged that it may have been slippery in the area as the temperature began to drop at 4pm, while visibility was also poor due to fog.

The accident caused major disruption to traffic and long queues, with the E18 highway shut in both directions and traffic diverted for a time on Tuesday. Later that night the road was fully opened again.