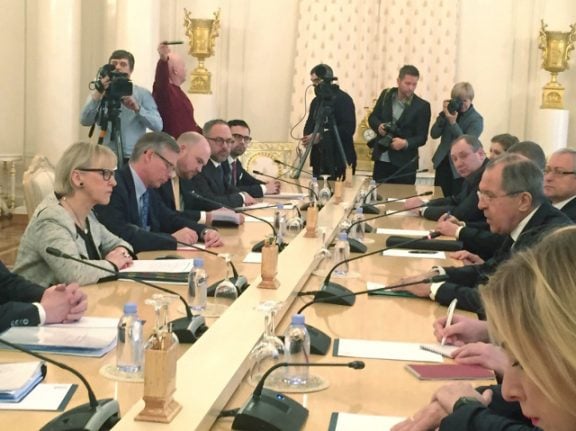 Wallström was in the Russian capital on Tuesday for a meeting with her Russian counterpart Sergey Lavrov in an attempt to thaw frosty relations between the two countries.

She also met with human rights organizations in the city during the afternoon, and one of the questions which came up was a recent legal amendment in Russia which decriminalizes some forms of domestic violence, including making “moderate” violence within families an administrative rather than criminal offence.

“This is deeply problematic because there are a large number of victims each year,” Wallström told Swedish news agency TT after the meeting.

Always important to meet civil society during my travels. Thanks @sakharov_talks for hosting informative event, keep it up. @SwedeninRU pic.twitter.com/pZCKlMYB7Q

The foreign minister said she also wants to share Sweden's experience of working to stop violence against women.

“There's a long way to go and it’s awful listening to some of the organizations, who have a lot to tell about a long, uphill struggle,” she noted.

“Every civilized country has laws that prevent violence against women, and we want to have that kind of law in Russia. It's very important for us that neighbouring countries like Sweden ask questions about it,” Marina Pisklakova-Parker from Center Anna told Aftonbladet.

Many of the organizations the Swedish foreign minister spoke with are branded as “foreign agents” in Russia, hindering them from acting in the country because they receive financial support from abroad.