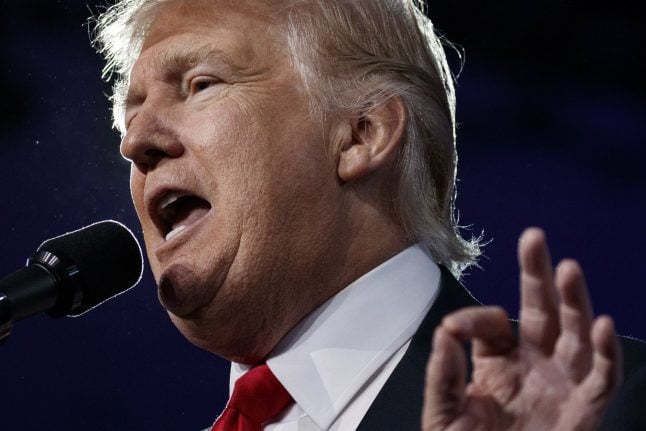 US President Donald Trump speaks at the Conservative Political Action Conference on 24th February 2017. Photo: Evan Vucci/AP/TT
The foreign ministry posted on its website a series of claims that have been circulating in the media since the US president made his remarks about Sweden in a speech in Florida on February 18.
Addressing supporters, Trump listed places that have been targeted recently by terrorists, citing Paris, Brussels, Berlin and Nice, and appeared to suggest something had happened in Sweden on February 17.
“You look at what's happening in Germany, you look at what's happening last night in Sweden. Sweden, who would believe this? Sweden. They took in large numbers. They're having problems like they never thought possible,” he said.
Apart from the fact that no major incident happened in Sweden, the remarks sparked indignation in the Nordic country and have led to a flurry of news reports about Sweden's immigration challenges and successes.
The country took in 244,000 asylum seekers in 2014 and 2015, the highest number per capita in Europe.

Ok, some facts about #Sweden
No. 1 pic.twitter.com/wC2dftdnaF

The foreign ministry post late Thursday addressed claims about violence, rape, alleged “no-go zones”, and social “collapse” among other things.
On terrorism, the foreign ministry said the sole attempted terrorist attack on Swedish soil took place in December 2010.
“No one was harmed but the attacker,” who blew himself up in central Stockholm, the ministry said.
It also rejected the allegation that Sweden had seen “a major increase in gun violence.”
“In general terms, violence has decreased in Sweden in the last 20 years. At the same time, surveys repeatedly show that people in Sweden and in other Western countries have a perception that violence is actually increasing,” it said, acknowledging that the Swedish perception has “been linked to the number of immigrants.”
“Despite the fact that the number of immigrants in Sweden has increased since the 1990s, exposure to violent crimes has declined,” and “research shows that there is no evidence to indicate that immigration leads to increased crime.”
The ministry admitted that the number of reported rapes has risen but stressed that the numbers could be misleading.
“But the definition of rape has broadened over time, which makes it difficult to compare the figures.
“If a woman in Sweden reports that she has been raped by her husband every night for a year, that is counted as 365 separate offences; in most other countries this would be registered as a single offence, or would not be registered as an offence at all.”
Foreign ministry spokeswoman Sofia Karlberg told AFP the government wanted to publish the text to “provide a correct and balanced image of Sweden.”
“It's not usual for Sweden to be used as a battering ram in other countries' political debates,” she added.