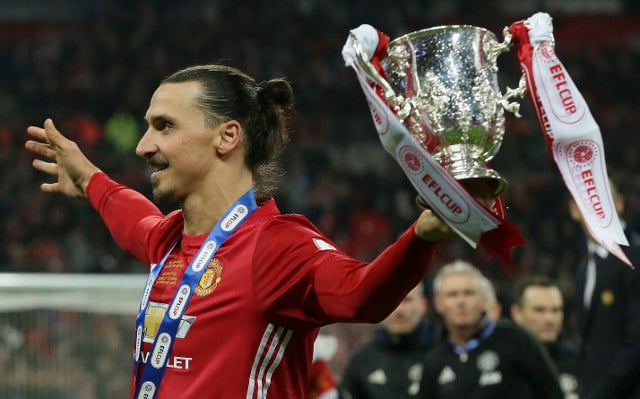 Following his key part in United's League Cup triumph on Sunday, Ibrahimovic thanked his children and Jose Mourinho for getting him to sign for the club, but refused to commit his future to them.

Asked about his plans for next season, Ibrahimovic said: “Let's see what happens.”

“I think in your career you have moments. I did not come to England before because it was not the moment.”

Ibrahimovic relished that he was confounding all those who thought him too old for the Premier League.

READ ALSO: Benjamin Button, a shark, and other things Zlatan Ibrahimovic has compared himself to

He was equally bullish when asked if the only way was down if he left United, one of world football's most well-known teams.

“For me, or the club?,” he replied. “I will stop on top. I will not play one game by being Ibrahimovic and for what I did before. If I don't perform, if I don't bring results, I will not play.”

“I will play as long as I can bring results.”

Ibrahimovic scored United's first and their winner in a 3-2 victory over Premier League rivals Southampton at Wembley on Sunday as they lifted their first trophy under Mourinho.

Both Portuguese manager Mourinho and Swedish striker Ibrahimovic are in their first season at Old Trafford, having previously worked together at Inter Milan.

Ibrahimovic, 35, noted: “If we speak about the coach (Mourinho), England, the Premier League, the club has to thank him because he called me and asked me to come here, otherwise I would not have been here.”

“Even my two kids wanted to see me play at United. I had my mind somewhere else. Before, everything was coming on top of the table, then Jose called.”

“I have a special relationship with him. When he called it was basically, 'tell me what number I should wear'.”

“My mind was not here. Then my kids started to bump my head and Jose called, then I am here.”

Ibrahimovic's contract expires at the end of the season, although there is a one-year extension clause.

His double against the Saints took his tally for the campaign to 26 goals and helped him win the 30th major trophy of his illustrious career.

Meanwhile Ibrahimovic's agent, Mino Raiola, offered few clues to his client's future in an interview with Talksport radio on Monday.

“I never speak about contract details with the press — I think that's something between the player, the club and myself,” he said.

“We're now concentrated on the next cup. This was a very important cup and very emotional for him, for me and for Mourinho too.”

Raiola said he never had any doubts about Ibrahimovic's ability to adjust to the Premier League.

“Knowing how he is and what kind of person and man he is on and off the field, he can do it anywhere,” he said. “He's the only player in the world who can be successful on Mars or the moon.”