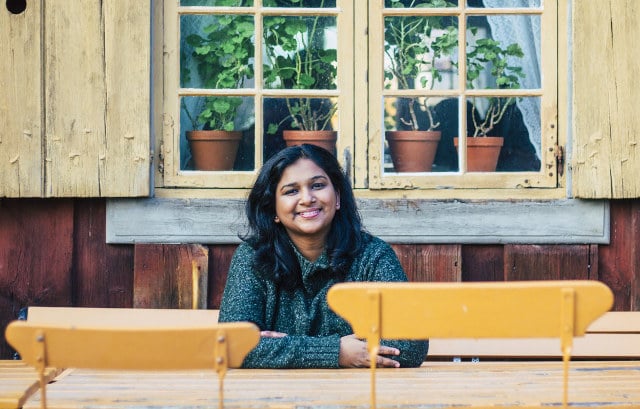 “Sweden has given me so much freedom to be a photographer. I can pick any place, walk there, and I'm not bothered by anyone. It has really given me freedom.”

Michelle Job speaks with genuine enthusiasm about her new adventure as a photographer in Sweden. The Indian mum of two moved to Stockholm last August with her family, and has found the possibilities afforded to her in the Nordic nation to be liberating.

“I had done a few shoots before I moved here. I feel it's much easier to photograph here. There aren’t many restrictions, unlike in India.”

Job came to Stockholm from Hyderabad in the south of India, a city with a population of over 6.8 million people, dwarfing the Swedish capital. She had been working as the editor of a magazine there, a different path from the one many Indians are expected to follow.

“I was born in the outskirts of a quaint little town in southern India called Tiruchirappalli. On average, if you ask any family in India what they want their child to become, they'd say 'an engineer or a doctor'. It’s a very driven, very ambitious culture,” she relates.

“I was unaware that there were courses other than engineering or medicine,” the Indian laughs. So study engineering she did – despite never really feeling a connection with the discipline.

Going to university would ultimately have its benefits however, as it introduced her to the creative work she would fall in love with.

“At the college they had their own national magazine, and eventually I became its editor. A few years later I got married, moved to a different city, and became the editor of an Asia-Pacific magazine. I got to work with a lot of creative people such as writers, designers and photographers,” she enthuses.

Job eventually stopped working as an editor when she had her children, opting to spend time at home with them instead. But that also gave her a chance to start properly pursuing another love.

“Photography has always been my passion because my mum used to take great pictures when we were kids. I quit my job when I was pregnant, and when the kids arrived, I started photographing and blogging about them.”

She uploaded some of her pictures to social media, and friends were so impressed they encouraged her to pursue photography professionally. A few memorable early shoots in India soon followed.

When her husband then got offered a job in Sweden, the whole family opted to move, and the resulting period of free time gave her a chance to take her pictures and writing even further. “We had a one-month break before our kids started school. So I said 'Ok, I should start exploring the city'. So when my husband would go to work, I would take the kids, and we would check out every park, every museum, every palace, everything I could possibly go to. I started exploring the city slowly on my own, and documenting my kids in pictures.”

Taking pictures proved to be the perfect antidote to the loneliness the newcomer felt after first making the move to the Nordic nation – a feeling many internationals will likely be familiar with.

“I came here with a lot of excitement. I spent months and weeks researching the place. All the excitement just crumbled within the first week,” she recalls.

“All of a sudden you're left all alone in a place where you don't know the language. It's so difficult to meet people and build friendships. The first time I walked around my neighbourhood and saw everything was in Swedish I panicked. I don't know if it's because it's so silent here, there are not as many people as in India. I started feeling very alone.”

Job managed to turn that initial feeling of alienation into something positive by taking pictures and writing whenever she explored something new. In turn, that led to work, with Facebook groups proving to be a useful way to make a breakthrough as an outsider in Sweden. “I knew there were Facebook groups before, but I never knew the power of them until I came here. I wanted to get some second-hand stuff, strollers etc, and a few of my friends recommended some Indian groups,” she explains.

“I thought it was just for buying stuff, but then I posted one of my pictures there and a lot of people showed interest and wanted me to take their pictures.”

One person who contacted her was Renjith Ramachandran, founder of Indian expat network Search Indie, who The Local has previously interviewed.

He commissioned photographs of the Stockholm Sangeet Conference and an event put on by the Indian Embassy. Things soon picked up from there.

“I was contacted by the Indian Cultural Centre of Scandinavia to capture a couple of their events. I'm getting to meet more people and explore diverse opportunities.” Along with Facebook groups, Job found reaching out and contacting other creatives to be a useful was of breaking into the Swedish photography world. In her experience, the stereotype of cold Swedes simply isn't accurate.

“I started following some prominent Swedish photographers on Instagram like Juliana Wiklund, a famous family/wedding photographer. She's amazing. I just followed her, left her a message asking about her workshops and if she’s going to conduct any in English. She was so warm, she said 'let's meet up for lunch!' and we met.”

“I also met a Jamaican-Scandinavian photographer, Andrea Davis Kronlund, who has her own online fashon website,” she adds.

“The impression I got is that the Swedes are reserved, unapproachable. To my pleasant surprise when I introduced myself as a photographer and wanted to learn from them, they were extremely welcoming, friendly, and very approachable.”

Along with the creative side of being a photographer there is also the business side to take care of, and thankfully that hasn't been too tricky either, according to Job's experience so far. Starting a company “sounds complex, but it’s actually very easy,” she notes, adding that free seminars by Startup Stockholm are helpful. Beyond getting her company up and running, one exciting goal she wants to tackle in the future is trying out birth photography.

And a bigger target for the long term is to try her hand at a Stockholm equivalent of Humans of New York – a world famous photoblog featuring portraits and interviews on the streets of New York City.

“I'd just like to document stories, go on to the streets, photograph individuals and showcase their stories. Something small, something big, something inspiring or moving. That's one of the things I really hope to capture,” she reveals.

After half a year in Stockholm, the blogger has concluded that the key to succeeding in Sweden's creative world is to get out and connect with the people you admire.

“You just need to identify the people who inspire you here in Stockholm, connect with them, and learn from them,” she suggests.

“Both of the renowned photographers I met had moved to Sweden from somewhere else. They were so generous in explaining how their journey has been. It's really inspiring and motivating.”