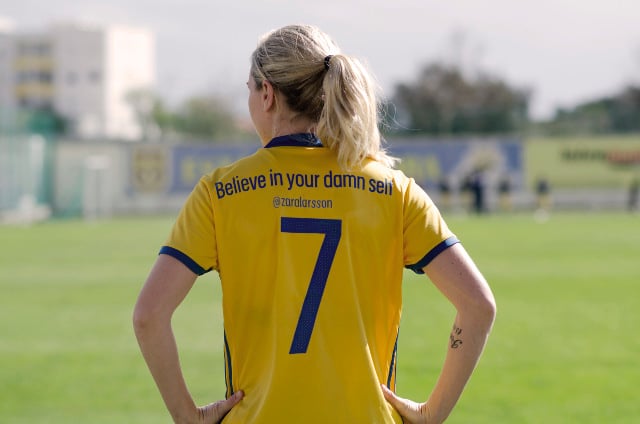 One of the new shirts worn by the Sweden women's national football team. Photo: SvFF

The “#IDittNamn” (In your name) campaign has been launched in the build-up to International Women's Day on March 8th. For it, Sweden's players were tasked with choosing a favourite message to display on the back of their matchday shirts, which are being worn for the first time at the Algarve Cup tournament this month.

Some other phrases picked by players include “Believe in your damn self” from a tweet by Swedish pop icon Zara Larsson, and “never look down on someone if it isn't in order to help her up” by Feminist Initiative politician Gudrun Schyman. The shirt with a phrase written by Gudrun Schyman in Swedish. Photo: SvFF
“The national shirt is an important and big symbol for us, and I think it's cool that we can come together with other strong women and voices through this, that together we can show that everything is possible,” Sweden captain Lotta Schelin, who chose the Schyman phrase, explained in a press release.

“There is always a need to prove to young girls that it's possible to succeed, that you can do what you want regardless, and that you shouldn't feel restricted in any way and above all because of your sex,” she added.

The shirts will made available for fans to purchase from International Women's Day onwards, and 10 percent of the proceeds will go to the “Alla är olika – Olika är bra” (Everyone is different – different is good) project which works to promote sport for young women.

So far the shirts appear to be lucky: Sweden wore them for the first time in their Algarve cup opener against Australia, and won 1-0.