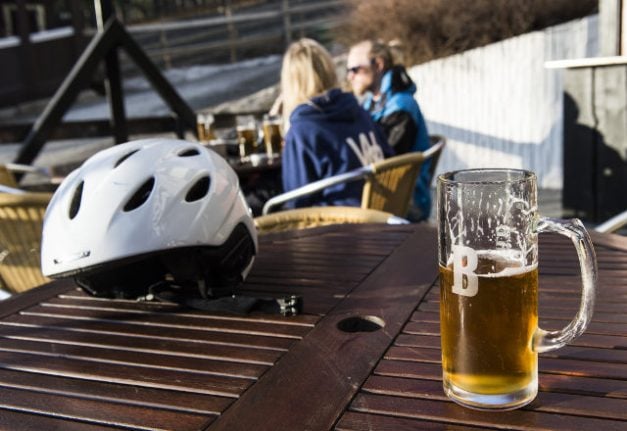 Swedish youngsters are becoming less permissive about alcohol, and exercise could be playing a part. Photo: Pontus Lundahl/TT

The change among Sweden's youngsters has been observed in the latest edition of IQ's yearly Alkoholindex survey of Swedish attitudes towards drinking.

The study asks interviewees to answer “right” or “wrong” to several alcohol-related scenarios, then creates an index score out of 100 based on the responses. The higher the score, the more strict attitudes are, so someone who answered negatively to all of the nine scenarios for example would receive a score of 100.

So in other words, young Swedes are growing more restrained in their attitudes towards alcohol, while Swedes in general are becoming more permissive.

“We've conducted the Alkoholindex study since 2010, and this age group shows the biggest change in attitude on alcohol consumption, moving towards a more moderate view of alcohol,” IQ CEO Juan-Pablo Roa told The Local.

Along with preventative campaigns targeting young people and their guardians, Roa points to a change in priorities for youngsters as an explanation for the change.

“We see trends that probably contribute: youths are more aware of the consequences of alcohol consumption, being healthy and fit is trendy and affects our lifestyle choices, and social media offers new ways to connect. We also have groups of young people who due to cultural and religious reasons don't drink alcohol,” he explained.

The majority (68 percent) of people in the 16-24 age category answered that it is “wrong” to drink so much you struggle to remember.

The study points out that while young people are becoming more restrained, their attitude towards alcohol is still very permissive in general, and their score on the index is the second most permissive among the age groups studied (25-34 is the most permissive age group).

In a seperate measurement which is also part of the study, the “Vardagsindex” (weekday index), IQ looked at Swedish attitudes towards drinking during the week. The latest edition shows that Swedes are becoming more relaxed about that concept, which was once something of a taboo compared to places like Britain and the Mediterranean.

That index shows a decrease of 2.9 points compared to the previous year, dropping to 45.6, suggesting Swedes are more relaxed about drinking during the week than they were in 2015.

“We see a trend moving towards a more restrained view of alcohol among the youngest group, and an increase in the sales of alcohol free products. But on the other hand, we see a trend of more frequent drinking on weekdays, more licensed premises, more alcohol marketing and so on. So it seems to be a bit polarized,” Roa concluded.

A subsidiary of Sweden’s alcohol monopoly Systembolaget, IQ says it works for a “smarter approach to alcohol” by creating awareness through publishing alcohol-related information, reports and surveys.

Article by The Local's Lee Roden and contributor Christian Krug.