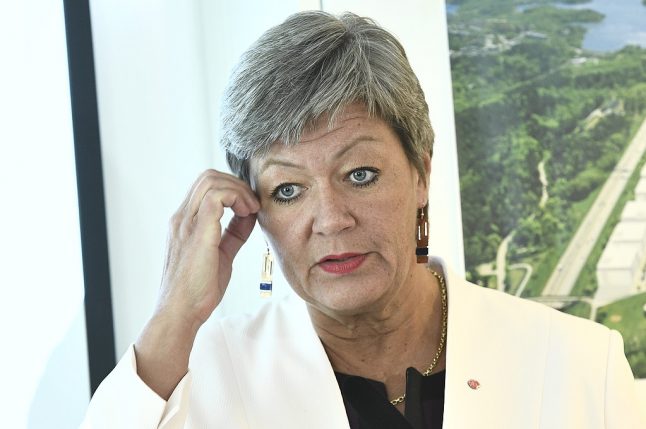 Sweden's Integration Minister Ylva Johansson. Photo: TT
During a recent interview with the BBC, the minister said: “When we make surveys about if any woman has been… if there has been a rape towards her or sexual harassment, we can see that the level is going down, and going down and going down”.
However, this isn't the case. The latest stats actually show a 13 percent increase in reported sex crimes in Sweden in 2016, and a general increase over the last ten years (more on this later).
Swedish social media users – including MPs, economists, and criminologists – flocked to Twitter to point out the minister's mistake following her TV appearance.
The Moderate party's labour policy spokesperson Elisabeth Svantesson was among those to criticize Johansson.
“We don't need more fake news,” she wrote on Twitter, calling for the minister to explain herself.
“In what way is the number of sex crimes decreasing?” she added.

Johansson corrected herself on Saturday.
“I based my answer on information that I had at the time, that the number of reports of rapes went down in 2015,” she told the Dagens Nyheter newspaper.
“It was wrong of me to speak of a development that was only based on one year. The preliminary figures for 2016 unfortunately show that the figures are on the rise.”
“It's important to be correct, of course,” she added.
Indeed, the number of rapes reported in Sweden increased by 13 percent in 2016 to 6,560.
But when that number is compared to 2014, where the number of reported rapes was 6,700, then a slight decrease can actually be seen, as the minister said in her correction. In other words, the number of reported rapes in Sweden dipped in 2015 (down by 12 percent to 5,920) then in 2016 it returned to around the same level as 2014.
Seen over a ten-year period, the number of reported rapes has gone up from 4,208 in 2006, partly because of legislative changes in the previous year and in 2013 broadening the definition, according to the Swedish National Council for Crime Prevention (Brå).
Read more about Sweden's crime stats for 2016 – including an analysis – here.
Url copied to clipboard!