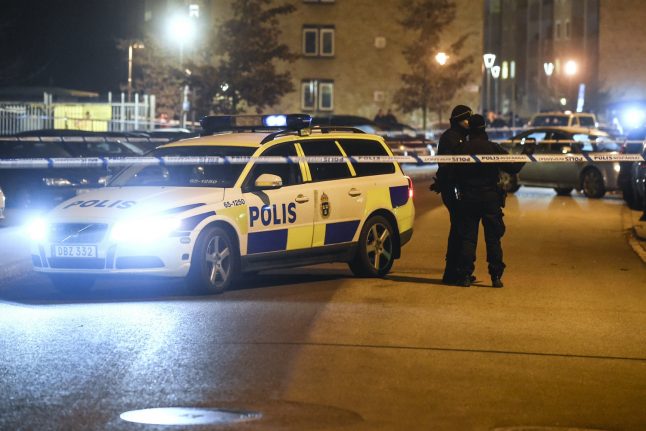 A police car at the scene on Kronetorpsgatan. Photo: Björn Lindgren/TT

Police sources told news agency TT that no suspect has yet been arrested.

Police received several reports at around 10pm on Saturday of a suspected shooting on Malmö’s Kronetorpsgatan. An injured man was found by police in a car on arrival at the scene and first aid was attempted.

A second injured man was found in a nearby apartment. Both men were taken to hospital.

Karolina Rosander, operations manager at Skåne University Hospital, later told TT that one of the men had died while the second remained in a critical condition.

An extended area around the crime scene has been cordoned off by police. Forensic investigation is underway at the apartment where the injured man was found as well as the scene of the shooting itself, Calle Persson of Region South Police (Polisregion Syd) told TT.

A large number of people will be interviewed by police, Persson said.

“The most important thing at this time is to arrest those responsible. This will be done through the use of witnesses, collecting evidence and internal surveillance,” said Persson.

The car was left on Kronetorpsgatan late at night with its headlights on, and appeared to have collided with parked cars on the side of the street. The car was positioned with its side facing the direction of the traffic and with one of the doors severely damaged, reports TT’s on-location photographer. Broken glass lay on the ground next to the car.

Police later confirmed to Sydsvenskan that the first victim of the shooting was found in the car and it was this individual that later died of his injuries. The newspaper reports that the car is registered to “a known criminal”.

Police technicians continued to work at the scene throughout the night. The car has been taken in for forensic examination, according to a statement on the Polisregion Syd website.