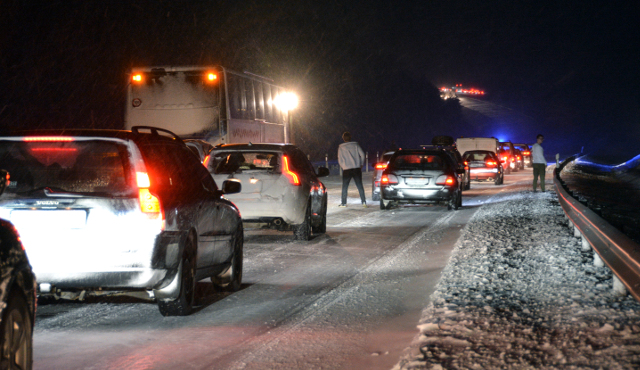 The queue at Stenungsund on Sunday. Photo: Mikael Berglund/TT

In Munkedal, Bohuslän, in western Sweden a bus went off the road on Monday morning and landed so that the doors could not be opened. None of the passengers, including 25 children, were injured and emergency services were called to help them evacuate the vehicle.

“They have had to climb out the windows with the help of ladders,” emergency control room officer Lars Bjurström told regional newspaper Bohuslän at around 9am.

The children were taken to their schools in a replacement bus.

Around 30 bus routes were cancelled on Monday morning in the Bohuslän region, which is just north of the city of Gothenburg on the west coast, said the public transport operator.

Almost 100 trucks got stuck on the E6 motorway between Stenungsund and Ljungskile, western Sweden, late on Sunday after they were unable to climb a hill on the icy road. Cars were able to get past, slowly, but trucks without snow chains were left standing.

Kalmar airport on the east coast meanwhile grounded all flights on Sunday night because of high winds and snow, which continued to affect airport traffic the following morning.

According to weather agency SMHI, spring has reached as far north as the Norrköping area. The rest of the country still has winter, according to the meteorological definition. Sweden says spring has arrived if average temperatures stay above 0C for a week.