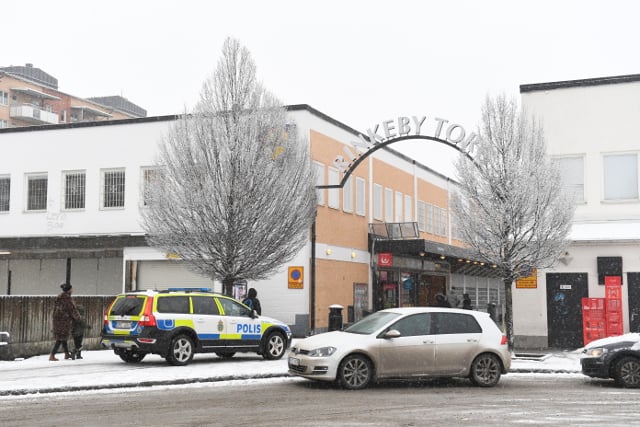 Rinkeby in Stockholm a day after the riot. Photo: Fredrik Sandberg/TT

Danish radio station Radio24syv spoke to the Rinkeby youngsters after the suburb hit global headlines over a violent riot a day after US president Donald Trump made controversial comments on crime in Sweden.

“They came up to us and said they wanted to see some action. They wanted to bribe us 400 kronor each,” a Rinkeby resident referred only to as 'Mohammed' told the radio station.

He said he did not know which TV station they represented, but that they had introduced themselves as Russian journalists and spoke what sounded like Russian to each other. The teenagers said they met them on February 22nd, two days after the riot.

Radio24syv reporter Tinne Hjersing Knudsen, who spoke to the youths, told The Local that they had told her the story when she asked them what they thought of Rinkeby's image and international media reports.

“My job in Rinkeby was simply to go there, stay for four days and find out if the place was as bad as it is being portrayed. I asked the youths what they thought about the media coverage and they said it had been bad from every media from every country and that a Russian TV crew had offered them money 'to do some action in front of the camera',” she explained, adding that she spoke to two boys individually who told her the same story.

Stockholm police confirmed to The Local that they were aware of the reports but had no other information. “We do not comment on rumours,” a spokesperson told The Local.

READ ALSO: What Rinkeby residents think about the riots

Rinkeby, north of Stockholm, has seen a frenzy of media activity in the past few weeks. The Local reported from the suburb and spoke to several locals without incident two days after a night of car-burnings and rioting. However, a US journalist said he and his team were followed by masked men and advised by police to leave on their first visit to Rinkeby. They went back a few days later without incident.

Knudsen said her impressions of the suburb were mixed: “I found Rinkeby full of tension but relatively calm and quiet when I was there. I spoke to many of the locals that were tired of the city's bad reputation and wanted to show the good sides of Rinkeby, so they did. I met many lovely people living in a difficult situation in a bad area with a lot of criminal activity.”

During a series of riots in the Husby suburb in 2013, Swedish tabloids were also controversially accused of paying youths to send in footage of car burnings. But security policy commentator Patrik Oksanen told The Local that the latest allegations could be looked at in the context of Russian coverage of Sweden lately.

“The big difference between the accusation that Swedish media paid for images and this are two things: partly that this is paying to create an event and not paying to film an event, and partly the perspective that the story fits all too well with the Russian information war,” said Oksanen, the political editor of newspaper Hudiksvalls Tidning and an experienced commentator on security and military politics and Russia.

“The Russian information war is described by many different security service reports in a similar way, it tries to paint Europe as a chaotic place in disrepair and tries to increase tensions within and between countries in the hope that both the EU and Nato will in time fall apart from the pressure. Then Russia can restore its sphere of influence and be stronger, in relative terms, than it is today,” he said.

“It is of course difficult to assess the credibility of the claim without having spoken to the people involved, but it is not at all impossible,” Kalle Kniivilä, a reporter for the Sydsvenskan newspaper and the author of several books about Russia, told The Local, highlighting a recent report from Rinkeby by Russian network NTV, which paints Sweden as a nation falling apart as a result of immigration.

“The large Russian channel NTV, which reported from Rinkeby a few days ago, is among other things known for smear films about the Russian opposition, but hardly for strong journalistic ethics. In NTV's report you can by the way suddenly see a Finnish police car driving past, even thought it's about Sweden.”

An editor of NTV declined to comment when approached by Swedish media.

Knudsen said that the Rinkeby youngsters did not seem aware of any geopolitical implications.

“They didn't put this into a big context of international politics where Russia is trying to misinform and create tension in the West. They didn't seem to understand why I thought it was particularly interesting that these journalists were Russian,” she told The Local.