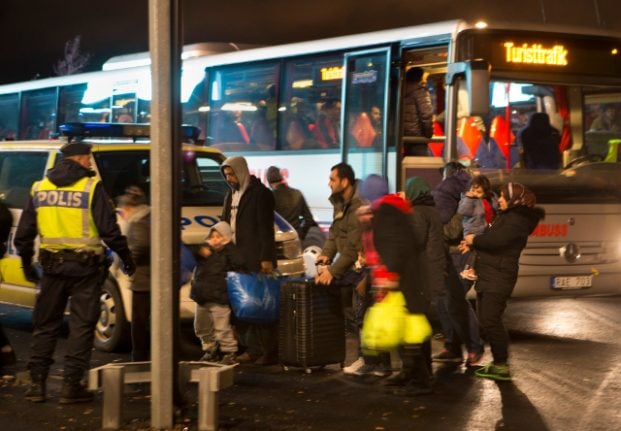 Refugees being transported to temporary accommodation in Malmö in 2015. Photo: Drago Prvulovic/TT

“Government agencies were not prepared, but that's not particularly strange, because they could not know how many were going to come,” report author Gudrun Antemar told a press conference on Thursday.

Antemar, the head of Stockholm District Court, investigated how the migration situation was handled in the autumn of 2015, the year when Sweden took in an unprecedented 163,000 asylum seekers.

“The Migration Agency prioritized the acquisition of accommodation, and it succeeded in living up to its ambition of organizing a roof over the heads of everyone who came, apart from on one single night,” reads the report, describing the situation as “intense”.

It states that Sweden could have been more prepared if authorities had properly analyzed indications that more people than previously thought were likely to come, and taken these predictions more seriously.

“If the early information that was available had been considered and used – despite the fact that it was by no means complete or analyzed – it could have meant better preparedness for the course of events that was to unfold,” reads the report.

But thanks to the hard work of staff and volunteers, Sweden managed to cope well with the situation on the whole, according to the report.

One of the flaws however was a delay in registering those who arrived, in particular children who came without parents. An effect of this was that an unknown number of refugee children were in the country and were placed in homes that had not been properly investigated.

“It's about the safety of the children,” Antemar told the press conference. The report states that because of the knowledge gathered at the time, Sweden would today be better prepared to handle a similar situation in the future: “The experiences that have now been gained of refugee reception mean that better knowledge is available and conditions are better for a good reception system when the numbers of refugees choosing to come to Sweden increases.”

Sweden has since tightened its borders and asylum rules. A review last year by the country's state auditor, Riksrevisionen, criticized the border controls. Thursday's report however finds that the government had good reasons to introduce the temporary controls, without saying whether they should be kept in place.