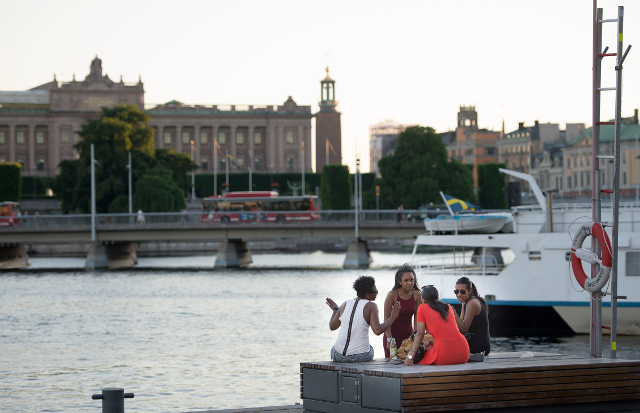 Female friends chatting to each other in Stockholm. Photo: Maja Suslin/TT

Based on 9,000 respondents' opinions and ranked among 80 countries, the US News & World Reports' Best Countries survey put Sweden top in the Best Countries For Women category, as The Local reported.

“Relative to the countries ranked, Sweden scored highest in a compilation of five factors that are relevant to the well-being of women: cares about human rights, gender equality, income equality, safe and progressive. Survey participants from around the world consider Sweden the No 1 country that most strongly exemplifies gender equality and cares about human rights, and rank it in the top-ten for the three other factors included,” Deidre McPhillips, data reporter at US News & World Reports, explained to The Local.

The domestic debate in Sweden tends to focus on the gaps that do still exist, for example that men make up almost two thirds of boards of directors for listed companies, or that reported sex offences have gone up in the past few years, or that only three out of 92 top positions in private equity companies are held by women.

Some have warned that the country could be in danger of losing its lead in the gender equality race; others argue it is still a guiding light on the global stage. For this article, we decided to ask women from other parts of the world how they feel their lives have changed – if at all – since moving to the Nordic country.

Sheona Urquhart, an artist and blogger who lives in Stockholm, told The Local: “I come from Australia, which is a fantastic country, but equality (in many avenues) has not been the top of our lists in parliament for a long time. Australian women still earn considerably less than men, most experience a difficult time re-entering the work force after starting a family and there's a real lack in women represented in senior positions. Maybe we can google-translate some Swedish legislation and express-post it down under?”

Statistics suggest that Sweden is far from perfect. According to a report by labour union LO, men in so-called blue collar jobs earned 24,831 kronor a month on average, compared to women's 18,486 kronor. In white collar jobs the wage gap was between 40,352 kronor a month for men and 31,004 kronor for women.

But compared to other European countries, Swedish women are poised to close their country's gender pay gap first, according to a recent study by British tech site Expert Market based on Eurostat and OECD data.

Fabienne Roy is a French HR manager working for a major digital company in the Swedish capital. “Compared to France, Sweden offers a lot of advantages for women. It is very common to have a woman at the top of an organization, as a leader. They do not have to sacrifice their career to raise kids,” she said.

“As an American I can unequivocally say that Sweden is better for women,” commented The Local's reader Jamie McCarthy Knupp on our Facebook page. “I never question whether men are taking me seriously. I never worry if I am making the same amount of money with the same experience and education as my male counterparts. Fantastic experience for me.”

But what about women entrepreneurs on Sweden's booming startup scene?

Last year Swedish incubator Sting for the first time handed cash to startups where half were led by women, but many argue that there is a gender imbalance in the tech and startup sphere that needs to be addressed.

“As the owner of my own company, I see that Sweden is struggling to get women involved in entrepreneurship, but I think the environment is improving. The business community is well aware of the problem and are taking measures to help women get connected to resources. Personally I feel very welcomed and well supported,” said Leslie Alfredsson, the founder of Malmö-based startup My Esteeme, and originally from Mexico City.

“It is an all-female company, and through our startup incubator, MINC, we have access to both female and male business coaches. We really appreciate being in a diverse and supportive environment in Sweden and I think Mexico should learn from this example.”

Sweden famously offers 480 days of parental leave per child which can be shared out between mums and dads as they see fit, but with each parent entitled to at least three months on a use-it-or-lose-it basis. Women still claim the lion's share of the leave compared to men, but the gap is slowly closing and to many foreigners the generous rules are above and beyond what they would be allocated in their home country.

“Sweden not only treats women with respect and dignity, it has identified what matters to women and what holds them back from pursuing their dreams. Sweden goes the extra mile in supporting and nurturing every mother – providing her with excellent medical care, adequate maternity break and financial support,” said Michelle Job, an Indian photographer and mother-of-two who moved to Sweden less than a year ago.

“The schools provide before and after school care for younger children along with nutrious food all for free. Nutritious food plus child care during the week – two major concerns for a mother are taken care of. It's amazing how Sweden encourages men to take equal part in parenting – precisely what a woman needs. With these fundamentals being well taken care of, Sweden lets its women break free from limitations, chase their dreams and soar to great heights.”

But Facebook signature Fairy Fairuz, from Malaysia, disagrees with the US News & World Reports survey. Sweden is not necessarily the best country in the world for mothers, she argues.

“Not really, no, maybe for working women it is best. But for mothers who choose to stay at home, do not want to send their small kids to förskola yet – we are frowned upon as if we do not follow the norm. That's pretty backwards. If you want to preach about equality for all, bloody hell make it right!”

But it does not just come down to statistics. There seems to exist a general feeling that there is a mutual respect between men and women, which many people we asked struggled to find the words to describe.

“It goes deeper,” said Urquhart, from Australia. “As a foreigner, you can actually feel the strength of women here and sense the level of respect they demand, which is different from anywhere else I've been. Women here are absolute powerhouses of freedom and liberation, which I think is partly due to the government vigorously mandating equality, but it's also due to Sweden's progressive culture. Only the other day at brunch, a Swedish male friend of mine casually stated that 'Swedish women do not need men'. Men here have played and continue to play a huge role in enhanced equality by proudly standing beside women as equals and shaking off the misconception that women depend on them.”

But some admit missing parts of the male-female relationship from home.

“In terms of perception, Swedish guys behave as equal toward women: forget the 'macho' culture here. However, woman has a specific symbol in the Latin culture where she is wooed, admired by men,” said Roy, an energetic Parisian missing the French social life. “I miss the gentlemen attitude: it is always good to get eye contact, a smile, a nice word in the street, to have someone helping you carrying your luggage at the train station, opening the door. I miss those little gestures. It does not mean we are inferior, it means someone cares about you. In France it is a code to show you are polite and respectful. So dear Swedish guys, the power is in your hands to make Sweden the perfect place for (French) women!”