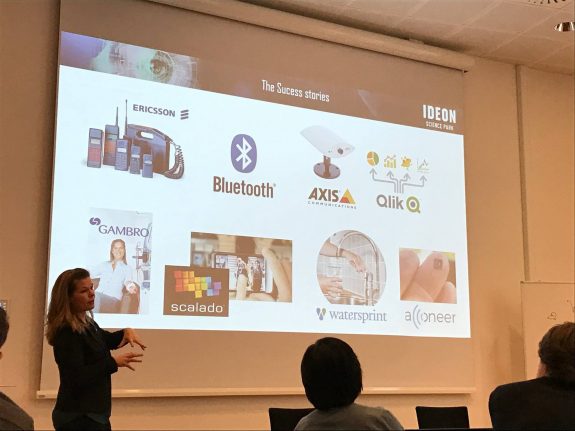 There may not have been a lot of sun shining in Lund on March 3rd, but that didn’t mean the day wasn’t a bright one for the NFGL delegation visiting some of the most innovative institutions in one of Sweden’s most innovative communities.

A group of roughly two dozen SI scholars had the opportunity to visit both the MAX IV Laboratory and Ideon Science Park, places where a lot of new thinking and discoveries take place.

And for Ivanna Read, who studies strategic communications at Lund University, the visit didn’t disappoint.

“The visit opened a door full of possibilities for us students,” she tells SI News.

Ivanna and other NFGL members started the day at MAX IV, an impressive facility that opened in 2016 and bills itself as being the “brightest x-ray source” in the world that helps “make the invisible visible”.

“It was cool to see scientists working in their own environment,” Ivanna explains. “Their research has so many applications, from biology and physics to geology and pharmacology. They’re even doing work to improve packaging and developing a new drug for diabetes.”

Ivanna was well aware of Sweden’s reputation for science innovation before arriving as an SI scholar from the Dominican Republic in last year. The MAX IV visit left her impressed with how the lab makes scientific research and discoveries accessible. A view from inside MAX IV.

“As a communications practitioner, I see how important it is to really know about the projects and the science behind them. If you want to spread information about the science, you really have to know what is happening,” she explains.

Ivanna also appreciated having a diverse group of fellow students along for the visit.

“It was great to have people with so many different backgrounds and have a chance to understand things from their perspectives,” she says. “Someone who studies law was interested in the legal implications of the discoveries, while one architecture student was looking at the building itself and the space.”

A culture of innovation

Following the stop at MAX IV, the group was then treated to a presentation and tour at the Ideon Science Park where “sharp minds create the future”.

First established in 1983, Ideon Science Park has long been a hub for innovation, housing research and development operations for a number of successful companies, including Ericsson, Texas Instruments, and Gambro.

Run in a partnership between Lund University and the city since 2012, Ideon is now home to more than 300 companies and 2,000 employees specializing in ITC, life sciences, cleantech and many other high-tech fields.

“From the moment I walked in, I felt inspired by everything, from the colours to the quotes on the wall,” Ivanna recalls. “Even before coming to Sweden, I know it was a country with a strong reputation for innovation, creativity, and outside the box thinking. Ideon was really a tangible example of all of that.”

Ideon CEO Mia Rolf took time to explain all the activities and opportunities available to students, entrepreneurs, and anyone with an idea and a dream.

“There were lots of opportunities and activities there for students to learn about the culture of innovation,” says Ivanna.

At the ‘Tuesday Pitch’, for example, emerging entrepreneurs can come and practice their pitch and get instant feedback from the audience. The best pitch even gets awarded 1,000 kronor.

“If you have an idea you want to develop, you can got there and get lots of support,” she adds. “It was also inspiring to see people like me developing ideas and making a real impact for millions of people.”

Overall, the visit was one of Ivanna’s favourite from among the three NFGL study visits she’s participated in so far. She agrees that the visits add a lot of value to students’ time in Sweden.

“You don’t just visit a place, you get to meet and engage with the people there,” she says. “It’s also great to meet others in the NFGL network and connect with people that have similar interests.”