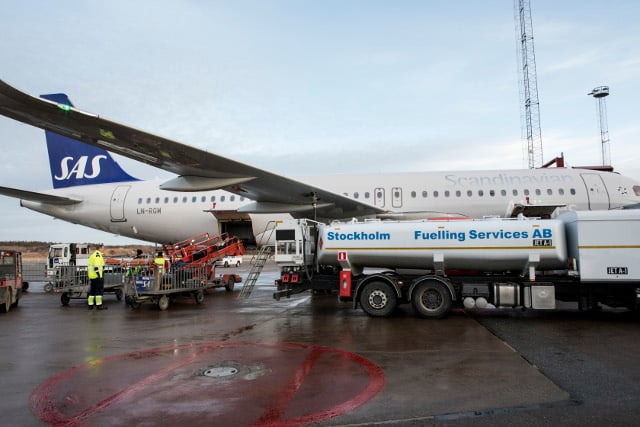 SAS and other airlines have cancelled some of their flights from Sweden on Friday. Photo: Christine Olsson/TT

Travelling to Finland or Berlin will be more difficult ahead of the weekend. Strikes over working conditions from ground staff at Helsinki airport, as well as Schönefeld and Tegel airports in Berlin have led airlines such as SAS to cancel a number of departures from Stockholm Arlanda.

SAS are offering passengers on the cancelled flights refunds, or the possibility to change their booking.

Finnair will cancel a third of its total flights on Friday, including some routes to Sweden, while almost all flights out of the Berlin airports are expected to be cancelled.

Swedavia, which operates Sweden's major airports, has warned that airports in both Stockholm and Gothenburg will feel a knock-on effect.

“It concerns about 22 arrivals and departures to and from Arlanda, Bromma and Gothenburg,” press officer Ulrika Fager told news agency TT.

Swedavia noted that further flights in addition to the 22 could be cancelled over the course of the day, and urged travellers to stay up to date through their airline or travel agent.

The strike in Finland is scheduled to take place between 15:00 and 19:00 on Friday, and will result in almost no employees working on the ground at Helsinki’s Vantaa airport. In Berlin the strike is expected to last 25 hours between 04:00 on Friday morning to 05:00 on Saturday.

Along with SAS, some Air Berlin, Norwegian, Lufthansa, Easyjet and Ryanair flights will be hit by the strikes.