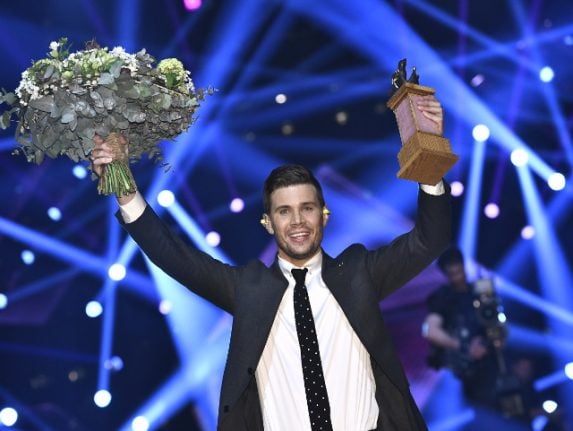 Why should I care?

Like it or not, Eurovision and the qualifying process Melodifestivalen are a big deal in Sweden. In 2016 the final of the qualifiers was watched by a massive 3.56 million people – over a third of the Swedish population, while this year the number increased further still to an incredible 3.82 million. That means the scrutiny will be pretty intense on this year's winner Bengtsson. How did he win?

Melodifestivalen is decided on a points system. The 12 finalists performed their entry at Stockholm's Friends Arena on March 11th, in front of both a crowd of 30,000 at the stadium, and the many more watching at home via TV.

Half of the points are awarded by an international jury, and the other half awarded by the Swedish voting public. This year, Bengtsson's entry “I can't go on” took 146 points, narrowly beating runner-up Nano's “Hold on” which was awarded 133.

Breaking the points down and analyzing them (and believe us, the Swedes do) shows that the jury vote won it for Bengtsson: his 96 points from the judges was 20 more than Nano's. On the viewer vote meanwhile Bengtsson took 50 points, one less than Wiktoria's “As I Lay Me Down”, and seven less than Nano.

How did he get there?

Like many Melodifestivalen entrants, Bengtsson is no stranger to TV talent shows. In 2008 he came third in Sweden’s version of the “Idol” competition, before having a crack at Melodifestivalen in 2016 and coming a respectable fifth in that show.

First signed by Merion Music in 2009 and now on the Capitol Music label, he has been part of the Swedish pop system for a while and is suitably polished, so it has been a case of perseverance paying off for the Svenljunga native. Typically for Sweden it has been hard to avoid Bengtsson's face in the months since he won Melodifestivalen. With the Eurovision finals kicking off in Kiev, the rest of the world now gets a chance to see him. First up is the semi-final at the Ukrainian city's International Exhibition Centre on May 9th, and if he can make it through that, he'll fight it out for the big prize on May 13th.

Bengtsson's popularity with the international jury at Melodifestivalen bodes well, and if Sweden’s recent record in Eurovision is anything to go by (two wins in five years since 2012) he stands a good chance at the competition proper.