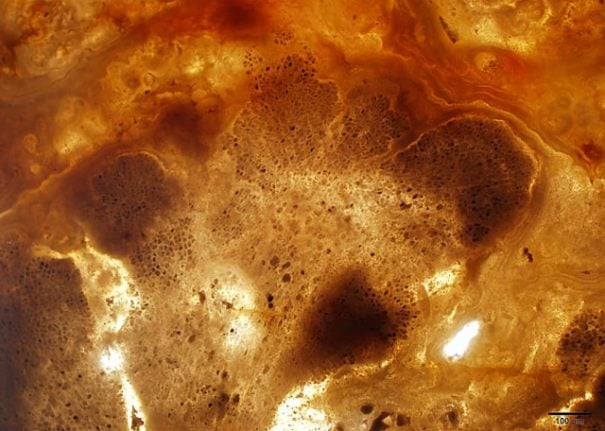 The team from the Swedish Museum of Natural History uncovered a pair of 1.6 billion-year-old fossils that appear to contain red algae.

Until now, the oldest known red algae was 1.2 billion years old, said the study in the journal PLOS Biology.

Scientists often debate the question of when complex life began on Earth, but they generally agree that large multicellular organisms became common about 600 million years ago.

This discovery could lead experts to rewrite the tree of life, said lead author Stefan Bengtson, professor emeritus of paleozoology at the Swedish Museum of Natural History.

“The 'time of visible life' seems to have begun much earlier than we thought,” he said.

This image actually measures around 2.2 millimetres across. Photo: Therese Sallstedt/Museum of Natural History

No DNA remains in the fossils to be analyzed. But the material structurally resembles red algae, embedded in fossil mats of cyanobacteria, called stromatolites, inside a 1.6 billion-year-old Indian phosphorite.

“You cannot be a hundred percent sure about material this ancient, as there is no DNA remaining, but the characters agree quite well with the morphology and structure of red algae,” said Bengtson.


An image showing what could be parts of chloroplasts. Photo: Stefan Bengtson/Museum of Natural History

Advanced tools – such as synchrotron-based X-ray tomographic microscopy – allowed scientists to observe regularly recurring platelets in each cell, which they believe are parts of chloroplasts, the organelles within plant cells where photosynthesis takes place, said the study.

Distinct structures at the centre of each cell wall are also apparent, and are typical of red algae.

The fossils were discovered in sedimentary rocks at Chitrakoot in central India. Chitrakoot in India, where the fossils were found. Photo: Stefan Bengtson/Museum of Natural History

The earliest traces of life on Earth – in the form of single-celled organisms – go back some 3.5 billion years.

The other researchers affiliated with the Swedish Museum of Natural History and involved in the report were Therese Sallstedt, Veneta Belivanova and Martin Whitehouse.

INDIA
UPDATED: When will Indians be allowed to travel to Sweden again?
Url copied to clipboard!