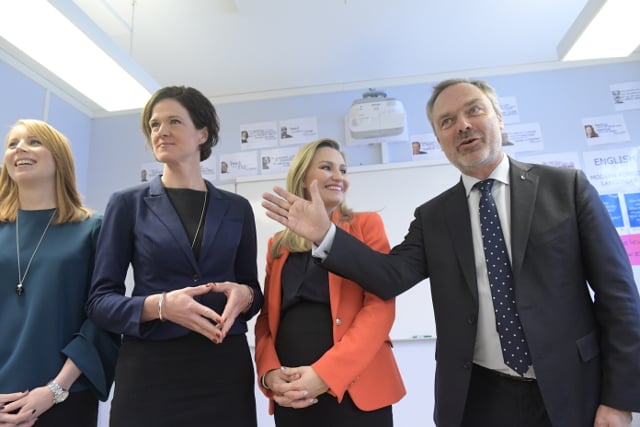 The leaders of the opposition Alliance coalition. Could it be on its way out? Photo: Janerik Henriksson/TT

It's a difficult time to be Moderate leader Anna Kinberg-Batra. On Thursday, a new opinion poll carried out by Inizio for newspaper Aftonbladet suggested that only 17.6 percent would back her party if an election were held today – the worst they have polled during the current 2014-2018 mandate period, and well short of the 23.3 percent of the vote they took in the last Riksdag election.

“The drop they seem to have experienced is precarious for the party. If they maintain that level in 2018, it’s a crisis for them. It’s too early to say if that will happen, but there are no signs of recovery at the moment,” Linné University political scientist Magnus Hagevi told The Local.

To make matters worse, a recent move to try to entice voters lost to the anti-immigration Sweden Democrats (SD) appears to have backfired for the Moderates. In January, they broke a longstanding taboo in Sweden by opening the door to cooperation with SD, who have been frozen out by the other parties in the Riksdag.

That hasn't gone down well on several fronts. This week for example the local leader for the Moderates on Gotland resigned in response, calling Kinberg-Batra's change in stance “irresponsible” and complaining that it has divided the centre-right Alliance coalition which his party is a part of.

Indeed, both the Centre Party and Liberals came out in opposition of talking to SD, as they also did a week earlier when Kinberg-Batra threatened to topple the current Swedish government by submitting a rival budget before next year's election.

With the Moderates dropping 2.2 percentage points in Inizio/Aftonbladet’s polling between February and March, the risk does not seem to have paid off for them. Meanwhile, Annie Lööf's Centre Party gained 1.2 percentage points in the same time period, moving up to 12.1 percent approval – that's double what they took in the 2014 election.

Not good for the Moderates, according to Hagevi:

“The Center Party moving forward is a particular concern for the Moderates.”

“I’d reason these are generally centre-right voters who are relatively positive on refugees and immigration, and haven't seen changes from the Moderates in that regard positively. That's where a lot of the Centre Party's future lies: with a Centre Party strongly rooted in the centre-right, there's not really any reason for the voters who left the Moderates for them to return,” he added.

The Centre Party's gains appear to be important too – polling at 12 percent is the best they have done since 1990, so their attempts to distance themselves from the Moderate line on some issues looks like it's paying off. If the trend continues, it could even mean a significant shake-up in the alliances which currently define Swedish politics.

“Above all the Centre Party and Moderates have distanced themselves from one another, while the Liberals are close to the Centre Party, and Christian Democrats to the Moderates. Lööf has made it clear she would rather work with the Social Democrats than the Sweden Democrats,” Hagevi observed.

“It could mean that in the future there's a return of what were previously called the 'middle parties' in Swedish politics, a term used to refer to the Centre Party and the Liberals in the 1970s and 80s. The scenario could be that there are three big political blocs: the red-greens (Social Democrats, Left and Green parties), the middle parties, and the right parties (Moderates, Sweden Democrats and Chrstian Democrats. If that's the case, time will tell,” he concluded.