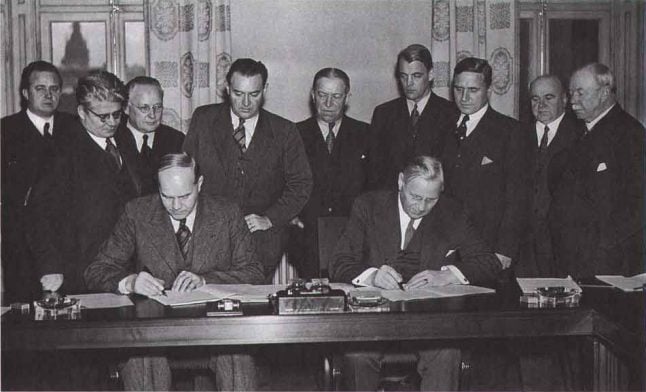 The signing of the historic Saltsjöbaden Agreement

While you’ve probably heard people talk a lot about the “Swedish Model”, the details may still be a bit fuzzy when it comes to collective wage agreements – which is the focus of attention on March 17th every year.

Why? Because March 17th is known as Kollektivavtalets Dag, a day set aside to draw attention to and celebrate what many consider to be the bedrock of the Swedish Model.

And what, exactly is a collective wage agreement and why are Swedes’ celebrating it?

“A collective wage agreement (kollektivavtal) is an agreement between different stakeholders in the labour market – unions and employers,” says Siri Reinhag of the Social Democrats youth wing, SSU.

“Instead of having politicians deciding what conditions should govern, it’s the experts in each sector – labour unions and employers – who decide the rules together.”

This fact that they are forced without the input of the state and cover workplaces across the entire country make Sweden’s collective agreements unique.

Each sector of the economy and profession develops a unique agreement that applies specifically to them, with agreements generally lasting from one to three years.

According to the Swedish National Mediation Office there are 680 collective wage agreements in the country covering 3.6 million workers – about 90 percent of the workforce.

Every year, a certain number of these agreements need to be renegotiated in wage negotiations referred to collectively as avtalsrörelsen.

And while there are of course laws on the books in Sweden that regulate the labour market and provide basic protections for workers, there is no national minimum wage law – what workers are paid is decided by the workers and employers themselves.

A milestone in the development of the Swedish collective agreement is the Saltsjöbaden Agreement, signed in 1938 by the largest labour union group, the Swedish Trade Union Confederation (LO) and the Swedish Employers Association (known today as formed the Confederation of Swedish Enterprise – Svenskt Näringsliv).

The historic agreement, named for the hotel outside of Stockholm in which it was signed, put an end to nearly twenty years of unrest.

“The conditions enshrined in collective wage agreements are things that workers have fought for for over 100 years,” says Reinhag.

“So today we’re celebrating for all of those who fought and all the improvements they’ve achieved in collective agreements.”

In practice, Kollektivavtalets Dag is celebrated by meetings and rallies, generally organized by labour unions, political parties, and other pro-labour organisations.

Many groups may publicize something on their homepage, or share links and information about collective agreements in their social media channels. In fact, this year (2017), the hashtag #kollektivavtaletsdag was trending on Twitter.

So if there’s a rally taking place near your university, or you’ve seen lots of flyers on campus, now you know why – and you know a bit more about the history of the Swedish Model.