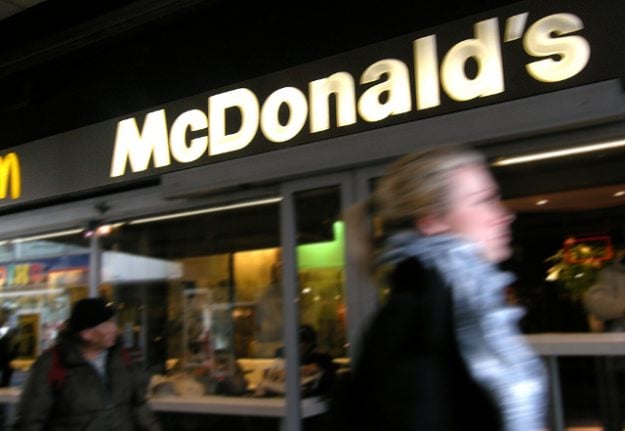 Vijaya Mårtensson and her friend Anja Andorsen were approached by the homeless man when they stopped at the McDonald's restaurant on Kungsgatan in Stockholm on Saturday evening.

She told The Local that he asked her to buy food for him and she agreed. But she explained that when she and the man together went up to the counter to order the McDonald's worker would not serve them.

“He who was responsible that evening said I was not allowed to buy [food] for him. How can McDonald's deny a person like me who earns their own money and chooses to give another human being food? What happened to Sweden's fairness and human rights?” asked Mårtensson.

She said she was told that the man had been taking food from trays left behind by other customers.

“But that's not strange if you don't have anywhere else to get food. I said I did not care what he had done before and that I was going to buy food for a fellow human being who was hungry,” said Mårtensson.

Her friend, who had been to the rest room, then came back and asked what was going on.

“She was just as angry as I was and asked if she was allowed to buy food for herself at least. Yes, said the manager. So she bought a meal and gave it to the man anyway,” said Mårtensson.

Christoffer Jornert, a McDonald's senior supervisor, told The Local that all customers buying food are welcome at their restaurants and are allowed to give their food to whomever they choose.

“In this particular case, the man who was going to get the food had been asked to leave the restaurant because he had been bothering our guests for hours and on several occasions tried to steal food from seated guests, which many had complained about,” he said.

“We had just called in security guards because the man had been aggressive towards both guests and staff and we did not want a confrontation inside the restaurant. We will of course follow up on the incident in more detail, and welcome everyone to eat and be at our restaurant, but we also have to ensure that our guests are allowed to eat in peace and quiet.”