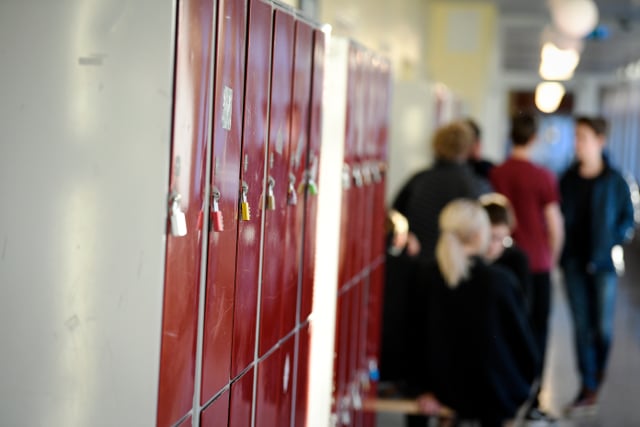 File photo of a school not related to the story. Photo: Pontus Lundahl/TT

The teacher, who works at a school in Kävlinge municipality, attented a meeting held by the militant far-right Nordic Resistance Movement where the group's manifesto was discussed. Sweden's security police has described it as one of the most dangerous far-right groups in Sweden.

The Swedish Schools Inspectorate is now investigating the teacher after receiving an anonymous complaint about her last week, writes regional newspaper Sydsvenskan.

“I have never seen such serious reports about a teacher. We have immediately launched an investigation,” Elizabeth Malmstedt of the education watchdog told the daily.

In a podcast published by a far-right site, the teacher, who Sydsvenskan reports is also active in nationalist and anti-Semitic groups on social media, confirmed that she attended the meeting, but denied being a member. “I actually had a really nice evening,” she told the podcast.

When approached by Sydsvenskan and its sister paper HD by e-mail, she declined to answer questions, adding: “I have people behind me you don't want anything to do with.”

A spokesperson for the Schools Inspectorate confirmed to The Local on Wednesday that they have launched an investigation, as is normal procedure.

“The investigation will lead to a decision on whether or not there are grounds to report the teacher to the teachers' disciplinary committee and request a warning or that their teacher certificate be revoked. The case is pending and it is not possible to assess how long it is going to take,” press officer Carina Larsson said.

The teacher is still working at the school, reports Sydsvenskan. The principal told the newspaper that the school has been told by lawyers that they have no right to ask questions about a teacher's political views.

“My work extends to ensuring that the education is based on democratic values. In the current situation there is nothing about her teaching that gives me reason to question that.”

The Schools Inspectorate is unable to comment on a specific case during an ongoing investigation, but asked about the general rules, Larsson told The Local: “In general, public sector employees including teachers enjoy freedom of speech as all other citizens in Sweden. But it is important to remember that the teacher in their teaching should always uphold those values shared by the school's values and clearly distance themselves from conflicting values. In Sweden's school act it says, among other things, that a teacher should promote human rights and actively discourage all forms of degrading treatment.”

Police are also investigating after posters with the teacher's picture, name, address and her parents' address were put up at the school by far-left group Anti-Fascist Action.

According to police reports filed by the teacher, last month a rock and smoke bomb were thrown through her window, her tyres were slashed and the word “Nazi” sprayed on her balcony.

The Local has e-mailed the school for a comment.