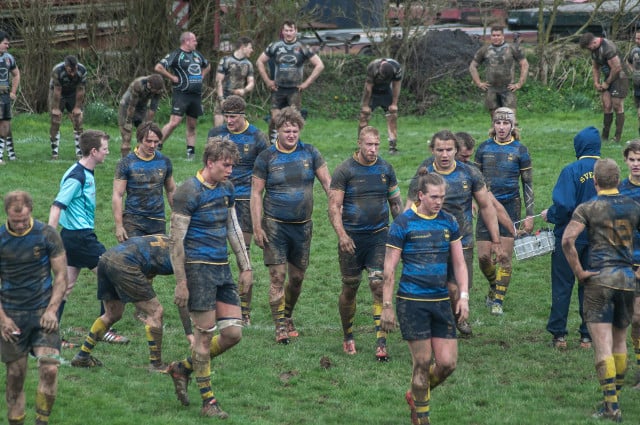 Not the face of happy rugby players. Photo: Gunnar Mattiasson

The match in Nantgaredig, a village with an estimated population of just over 500 people, ended with a convincing 46-5 win for the home side over the Swedish national team, and made headlines in the Welsh media.

But according to Neil Johnson, technical director at the Swedish Rugby Union (Svenska Rugbyförbundet), the result isn’t as bad as it may appear.

“The result wasn’t on the scoreboard, it was about the experience for the players. We had five sessions and two matches in three days, and we play in the summer, so the guys felt like they were running in treacle when they got onto the Welsh pitches,” he told The Local.

“We had a very young team who play in the summer. For some of them it was their second game ever on grass. We’re completely off season. Those aren’t excuses, don’t get me wrong, it’s just that our expectations were completely different to theirs.”

The game was arranged to mark the 50th anniversary of the Welsh village outfit, and the Swedish Rugby Union agreed to send a national team to mark the special occasion. While the visitors were there for development purposes however, the locals only had winning on their mind.

“They had a lot more to play for. They played smart, put us under pressure, and we couldn’t really deal with it. Put it this way, the legs were tired,” Johnson laughed, adding that the Welsh have been invited to come over to Sweden for a rematch in the summer, when the Swedes will be fitter.

Rugby isn’t traditionally one of Sweden’s favourite sports, but Johnson said that it is starting to get bigger, and there is a long-term plan to try to raise the current national team’s level.

“A lot of people in Sweden still perceive rugby as the way it was in the 70s. But with rugby sevens getting shown over here we’re getting more media coverage. I think we’re going to see an increase in popularity.”

“It was a development team we used, which we’re going to give four years. The guys just aren’t used to going to rugby heartland at all. Over here it’s ice rinks and football pitches, then all of a sudden you go to places where there are rugby posts and everyone knows rugby. It was a tremendous tour – more positives than negatives,” he concluded.