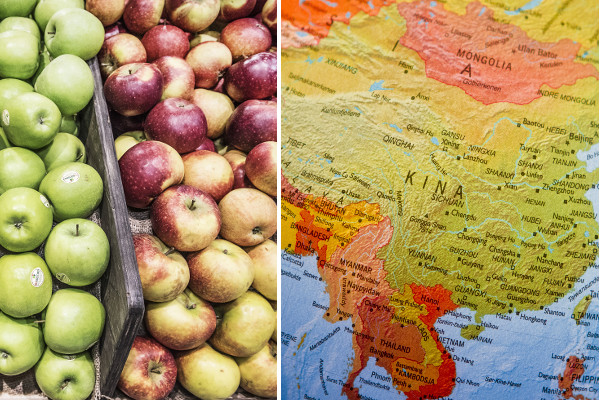 Apples from China? All will be explained. Photo: Tomas Oneborg/SvD/TT & Vegard Grøtt/NTB Scanpix

One of the most commonly used words in Swedish doesn't actually hail from Sweden at all – or at least not modern Sweden. Pojke, meaning boy, is derived from the Finnish word poika, which means a male child. It's thought to have first crossed over around the 1600s, when Finland was still part of Sweden. The individual components of the Swedish word for sport (“idrott”) date back to before the Swedish language even existed: the Old Norse words “id” (meaning business or activity) and “drott” (meaning power).

The term in its modern usage however is from the Icelandic “íþrótt”, and was borrowed in the 1600s when there was a period where Swedes had a growing interest in Norse culture and literature. The scourge of many an English speaker trying to learn Swedish, thanks to its similarity to the English word for a completely different fruit, the Swedish word for orange has its origins in Low German, and when those origins are detailed, the confusion with the other fruit starts to make sense.

The “apel” part comes from the Low German word for apple, while “sin” is from the Low German word for China, and when combined it originally meant “apple from China”. Why? Though oranges were previously grown in Europe under different names, in the 1600s the Portuguese started to import better, sweeter varieties from China and they grew in popularity, giving the present Swedish name its origins. This word comes from Scandoromani, the language of the North Germanic Romani people, where it means “daughter”. When it was first incorporated into Swedish slang, the term was used to refer to young working class women, then morphed into a term for teenage girls, before taking on today's more general meaning for a young woman. The French language has had a significant influence on Swedish thanks to close ties between the two nations during the 1700s, and some of the words taken from French into Swedish, like champinjon (mushroom) or glass (ice cream) are pretty obvious.

Perhaps my lack of French furniture knowledge is showing here, but “fåtölj” (meaning armchair) is less obvious, or at least, the details of its origin are. The word – which perhaps unsurprisingly first appears on record as being used in Swedish in the 1700s – originates from the French term “fauteuil” for a type of open-arm chair popular at that time.

But there’s a twist in the tale: the French word itself is derived from the German word “faldestuel” for a folding chair used by nobility, so this one has been around the block to say the least. Not used exclusively by the nobility. Photo: Jessica Gow/TT

We chose the Swedish word for a ship's stern (“akter”), but there are many more words related to sea and shipping in the language (“koj”, meaning berth, is another) with similar origins, from Dutch.

The explanation for that pretty specific category of loan words is that during the 1600s, the Netherlands was Europe's leading trade and shipping nation, the impact of which was felt in Gothenburg in particular, where they invested heavily and where Dutch workers were also contracted to construct parts of the city. The stern of a ship leaving a harbour. Photo: Johan Nilsson/TT