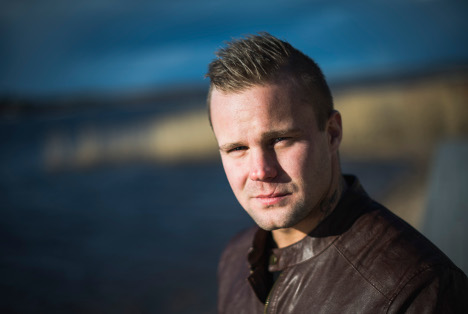 Kimmie Ahlen was once seduced by the violent underpinnings of National Socialist ideology. Photo: Jonathan Nackstrand/AFP

With a blond buzz cut, piercing blue eyes and beefy shoulders chiseled in the gym and boxing ring, Ahlen makes an imposing impression. The young boy who was once teased by his classmates is long gone, transformed by muscles and tattoos on his fingers and neck.

At an age when most students were enjoying their first flirtations and struggling through book reports, he joined a gang of neo-Nazi skinheads immersed in Nordic mythology and Holocaust denial, convinced of the
superiority of the “white race”. Many of them were criminals and drug addicts.

But that was then.

Now 27, Ahlen spends his time warning teenage students in Sweden about the dangerous allure of hatred, in a country of 10 million that has taken in almost 300,000 migrants since 2014.

“The world is different today. Donald Trump is president of the United States and the Sweden Democrats may soon take power in our country,” he said in an interview with AFP, referring to the country's far-right party.

A municipal youth councillor, he lives alone in a red-and-white cabin on the shores of Lake Vanern, Sweden's biggest lake. Three hours southwest of Stockholm by car, it is an ideal spot for meditation and reflection.

As a shy boy, Ahlen was bullied at school by his classmates and even by some teachers. In his free time, he collected objects he found on the ground.

One day, when he was 12, he stumbled across a CD by Ultima Thule, a Swedish white-power rock group popular among neo-Nazis. It was a revelation.

“I loved the music,” he said. “What really appealed to me was the way they spoke about Sweden. It made me patriotic, a National Socialist, without understanding the significance of nationalism at all.”

Soon afterward he joined the local gang of skinheads in Vallberg, in central Sweden. There was not a single foreigner among the town's 3,000 residents at the time, but unemployment, and hopelessness, were rampant.

'Gave me an identity'

His conversion began with his appearance: At 14, Ahlen donned the neo-Nazi uniform, suiting up in a bomber jacket and Doc Martens. “It gave me an identity, the feeling of being someone,” he said.

Between 2006 and 2008, he attended neo-Nazi demonstrations across Sweden. When he was not beating up left-wing activists, he was giving speeches: “I remember making up a story about immigrants who barbequed cats and ate them,” he said.

He dropped out of high school, began experimenting with drugs, and repeatedly got arrested for crimes including theft and vandalism.

And in the end, it was drugs that led almost surreptitiously his turnaround.

“It was more fun to do drugs,” he acknowledged.

He gradually distanced himself from the skinhead crowd, but without abandoning his National Socialist convictions.

Until one day, his boxing trainer forced him to spar with an Iranian-born partner.

“It was either that or not learn to box,” Ahlen said. “It was around that time I stopped hating people because of their appearance.”

During a stint in jail for theft, he met a Swedish teacher who helped him to turn the page on racism for good; For the first time, Ahlen felt as though someone was really listening, and he started talking.

But it was only during his last stay in jail, a time when his mother was gravely ill, that he decided to change.

He got a job and quit hanging out with his friends to spend more time with his new colleagues — and started writing poetry.

At the insistence of his former boxing instructor, he gave his first speech for youths, the beginning of his social work.

“I wrote down my whole life on 22 A4-size pages. I read from the first to the last page without looking at anyone in the auditorium. The worst speaker in the world,” he recalled.

He has since removed some of his tattoos – “they weren't really appropriate at the swimming pool”, he says, declining to say more – and says he is committed to making sure each teenager he meets is taken seriously.

In his eyes, exclusion is what pushes young people toward harmful behaviour.

“You have to show them tolerance and talk to them, instead of closing the door and leaving a whole group on their own to burgeon and grow even more hateful and violent and dangerous.”

And his work has taken him far beyond Sweden: Last year Ahlen took part in a Unesco conference on preventing violent extremism in New Delhi.