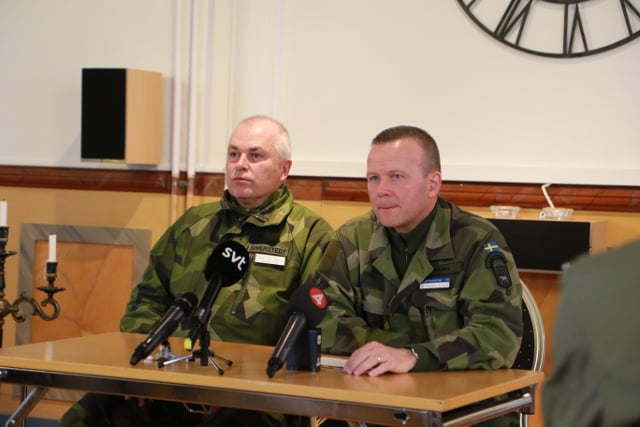 Mikael Frisell and Ulf Siverstedt of the Armed Forces at a press conference on Monday morning. Photo: Daniel Persson/TT

“The worst thing that can happen has unfortunately happened. In this difficult time, our thoughts go to family and his closest friends,” said regimental commander Mikael Frisell in a statement.

The vehicle fell through the ice of a river near Brännberg between Boden and Älvsbyn at around 10.30pm on Sunday. Military recovery vehicles, ambulances and rescue swimmers were dispatched to the scene, but were only able to salvage the armoured vehicle at around 2.30am, some four hours later.

The 23-year-old man, a soldier from southern Sweden, was declared dead at the scene. Several people, including a soldier who was also in the vehicle but managed to climb out and other military staff who took part in the rescue operation, were treated for hypothermia.

The accident happened during the Vintersol (winter sun) exercise, which is training soldiers to operate in winter conditions. Up to 1,200 people from seven different units are to take part in the exercise this week. Approximately where the accident happened, around four kilometres from Brännberg. Photo: GoogleMaps