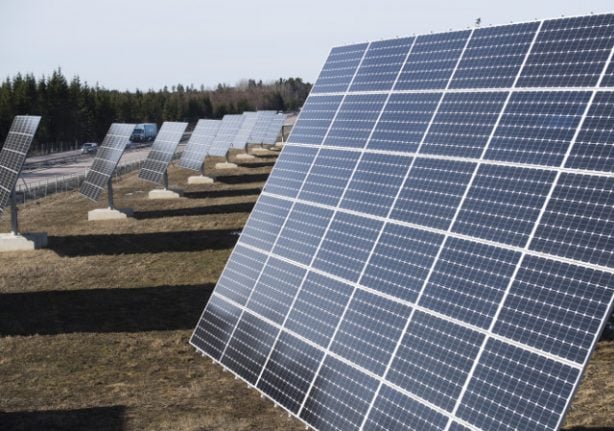 NGO network Carbon Market Watch and NGO Transport & Environment released the “EU Climate Leader Board” ranking this week to coincide with negotiations over the EU’s key legislation on climate action, and the Nordic nation is judged to be one of only three EU countries of 27 in the report pushing in the right direction to deliver on the Paris Agreement.

Ratified by 141 nations and entering into force in November 2016, the historic Paris climate accord is designed to combat climate change at a global level.

“We can say that from all EU countries, when it comes to how seriously it takes the Paris Agreement, and how that is reflected in their positions when negotiating climate files in Brussels, Sweden has the best position,” energy analyst Carlos Calvo Ambel from Transport & Environment told The Local.

The study ranked EU nations in relation to goals published in a European Commission proposal for climate action that are intended to make sure the EU fulfils the obligations set out in the Paris agreement.

Sweden tops the list, followed by Germany and France, while Poland is rock bottom.

The Scandinavian country scored highest because of its moves to close loopholes in European climate law, and its plans to achieve higher domestic emission reductions than the 40 percent target the European Commission has proposed EU member nations should reach by 2030.

“Sweden advocates the closing of the Emission Trading System (ETS) loophole for instance,” Calvo Ambel pointed out. A European scheme for trading emissions allowances, the ETS places a cap on emissions then allows participants to sell leftover credits if they have a surplus.

“The ETS has a massive surplus of allowances that accumulated over time. Some want to use those allowances to avoid reducing emissions in sectors like transport. Sweden also advocates not rewarding countries that will not meet 2020 EU climate & energy targets. Besides, Sweden has a long-term vision still lacking in most member states,” he added.

But there are still improvements Sweden could make in its climate change framework, according to Transport & Environment.

“It could clearly advocate to avoid abusing forestry credits. Another way it could improve its position could be by advocating to establish financial penalties for countries not complying with its obligations,” Calvo Ambel noted.

Currently governed by a Social Democrat-Green coalition, in February Sweden announced an ambitious new target of achieving a net level of zero greenhouse gas emissions by 2045.

Climate Minister Isabella Lövin told The Local that she thinks meeting the goal is “entirely possible”.

“We can see that with goals we set previously, like the one for renewable energy levels by 2020, where we have already met the target. I wouldn't be surprised if it's sooner than 2045,” said the minister.