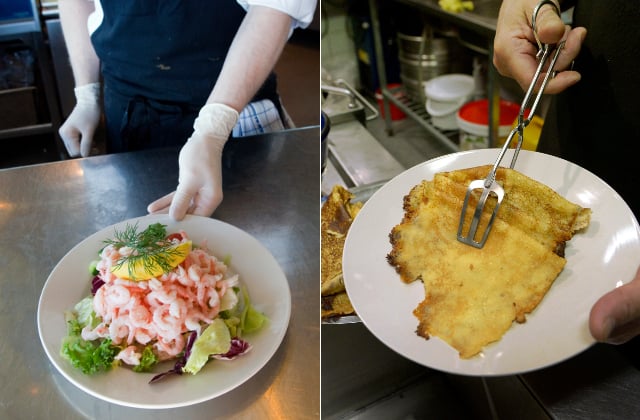 Due to my savagely poor Swedish pronunciation skills I live in a world of curious conversations and extraordinary exchanges. Everyday, I never quite know what linguistic labyrinth I am going to find myself getting lost in, and whether I am going to get myself out again with a semblance of dignity intact. Well, actually I do have a pretty good idea that my dignity is probably going to end up scattered on the floor around my feet, because that’s where it tends to spend most of its time, and has done ever since I was 11 years old and got lost on a cross-country run and they had to send out search parties for me.

Let me give you an example: It was my little boy’s birthday (nine, going on nineteen, I understand half of what he says and that scares me, so I figure it’s best if I don’t understand the half I am blissfully unaware of) and he wanted potato pancakes for his birthday-day meal. I went to the local supermarket, but for the life of me I couldn’t find the potato pancakes. As supermarkets do, they had moved everything around since the last time I was there, even going so far this time as dismantling shelves and moving the robot monkey. Ah, the robot monkey. One of the reasons I feel myself drawn to this particular local supermarket is because of their range of animatronic / robot animals scattered around the store, to add a certain, I don’t know, “freshness” to the produce. I certainly feel happier buying milk as the artificial cow moos.

Perhaps I should’ve spent more time looking for the potato pancakes rather than the monkey, but I couldn’t find them anywhere. Instead I found a very nice young man with a man-bun and chopsticks in his hair and asked him where the potato pancakes were. “Follow me”, he said cheerfully, and off he went a brisk pace, chopsticks clicking, to a very different part of the store from where I had been (still no sign of the robot monkey, but luckily the mechanical chickens were still in place, guarding the eggs) and came to a halt by the ready-made food section. “Here you go”, he said, pointing at what was, demonstrably, a plastic-wrapped prawn sandwich.

Let’s back-track a little here. I had (admirably) attempted to have this whole conversation in Swedish. So what I had actually said to him was: “Ursäkta, har ni raggmunkar?” (“excuse me, do you have potato pancakes?”). When he showed me the very un-potato pancake-like prawn sandwich, I said: “Um, nej. Det var raggmunkar jag…” and I trailed off, looking sadly at the prawn sandwich. He looked puzzled, looked at the prawn sandwich and said, nodding, very positively towards it, “Räkmackor.” “No, like, some sort of potato pancake” I said, switching to fail-safe English. There was a moment’s pause, and I saw the crackle of electricity behind his chopstick-powered man-bun eyes as he worked out he was talking to a man who couldn’t actually articulate, and then he said. “Ah! Raggmunkar! This way!” and we went back, at some speed, to the general area where we had started from. At least I had been in the right general vicinity originally.

So, I now live the life of a man who, when he tries to say “potato pancake” / “raggmunkar”, actually says “prawn sandwich” / “räkmackor”. And I guess it works the other way round too, if I am at a café and order a prawn sandwich, there is a very high possibility I’m going to get a plate of potato pancakes thrust my way instead. Is it worth carrying on with my attempts to speak Swedish? My pronunciation is obviously way worse than I realized.

Let me give you another example. Same supermarket (I was going to find where they had moved that damned robot monkey to if it was the last thing I did) different day. I needed to buy some herbs. I was standing by the herb display, checking out herbs (the life I’d always dreamed of when, back in Britain as a ten-year-old, I’d drawn pictures of myself as the Captain of a nuclear submarine, buying herbs and blowing up scary fish), when the gentleman stocking the shelves (middle-aged, no chopsticks, no man-bun, but impressive jowls and really tiny ears) accidentally bumped into me. “Oh, sorry,” he said. “No problem,” I replied. “Ginger?” He responded, and leaned past me to pick out a jar of dried ginger. “Right here.” As you can imagine, this rather puzzled me at first.

Again, let’s back-track. Once more I had attempted to dazzle with my Swedish skills. The gentleman had bumped into me and said “Oh, förlåt”. I said “Ingen fara”, he said “Ingefära?” So, it seems that if try and say “no trouble” in Swedish (“ingen fara”) it is going to come out as “ginger” (“ingefära”). I can now not even apologize properly in Swedish without seeming to call out random root vegetables. Once more, this is not the life I intended on inhabiting. I thought that by 52 I would be George Clooney-cool with a smooth line in chat. Not someone who dribbled herb-names by way of apology.

I can even scare people with my poor pronunciation. I went to pick up my son from school, and I couldn’t see him. I could, however, see one of his friends. “Hej!” I said, “Hur är läget? Har du sett Sam?” In my world, I had just said “Hi, how’s it going? Have you seen Sam?” God knows what I had actually said though, as the little boy seemed to actually start shaking, his eyes grew wide and terrified and he said “Jag kan inte prata engelska!” (“I can’t speak English!”) and he backed away from me. Backed away. Not only am I not George Clooney-cool, but small children actually back away from me. Okay, to be fair, maybe that isn’t just the language. Maybe small English children would back away from me too. I’m not sure if that makes me feel better or not.

So, either I have to drastically improve my Swedish pronunciation (hah!), stick purely to English (tempting) or never leave the house and do everything on the internet (even more tempting). Unfortunately I do have to pick up the children from school, so if I don’t want to live a life of children backing away from me then I guess I have to do something about my language. Unless I can find that robot monkey and program him to go and collect the children. I rather like the idea of staying indoors and having a robot monkey helper to do my bidding. But then, who wouldn’t?