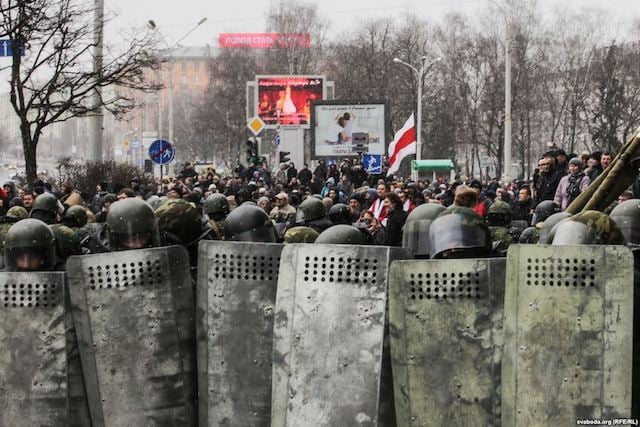 While citizens of 82 Russian cities demonstrated against the alleged corruption by their prime minister Medvedev (with over 1,000 people detained by police), Belarusians have been fighting against the tax on the long term unemployed.

The youth were the ‘black swan’ no one expected to see in the streets, actively joined the protests and in some cases even became the leader of it. Tony Snizhko – board member of the SI NFGL Media, Communication, and Human Rights (Stockholm) – shares his perspective on the events happening in Belarus, a country in one-hour flight away from Stockholm, and the role of education in latest protests.

Belarus, famous for its political silencing, came back to the international media agenda with a tremendous activists’ campaign that shattered the barriers between the state and the people. For almost two months from small villages to the capital, the country has been on strike.

16 000 protesters in 12 cities have participated in so-called “marshes of parasites”: marching on the streets to challenge the unfair tax law that requires to pay fines for being unemployed. People who demanded the revoke of the law found they were not alone in their poverty, insecurity about the future, and the lack of social guarantees. March 25th – the unofficial celebration of Belarusian independence – became a culmination of the protests with Belarusian independent media calling for solidarity.

It’s Saturday, March 25th, ten o’clock in the morning. While I am enjoying my first cup of coffee, my colleagues and my friends are being arrested and put into a truck that will take them to a police station where they are going to be illegally detained for observing and reporting on the human rights violation in Minsk. Along with 150 other activists and citizens my friends will face trial and imprisonment, and they will have to serve from 10 to 15 days in jail before they are released.

National protests have never been a thing for Belarus. The state has used every accessible means: from militant violence to propaganda and law prosecution – to suppress any political or social engagement, and a lot of people became scared to participate in politics, since we live in a country where nothing has ever changed.

And then this brand-new Decree #3 “Preventing the social dependency” (“Tax on social parasitism”) was introduced by the government. Now, one should pay a fine for being unemployed, with money one doesn’t have, or one can go to a commission composed of bureaucrats and explain why one can’t pay the tax! And, of course, people are afraid of the state, but they are also afraid of being unable to feed their children, being unable to get proper health care and to pay their rent. So, they marched on the streets. If you look closely at the pictures from the protests, you’ll find a lot of young people.

What were people who have never in their lives experienced another president doing there (Alexander Lukashenko has been serving as the President since 1994)? This is, I believe, the most important result of education.

During the last couple of years a lot of the projects that dealt with informal education in Belarus where in some way connected with human rights: European Colleagues of Liberal Arts introduced a program on culture and the society, youth-center Fialta held several trainings on equality, empowerment and self-advocacy, RADA invited young people to learn about their opportunities for self-advocation and influence on youth politics.

By learning about other experiences, talking to experts from Europe and fellow students from European states, by understanding that there are other ways of communicating with the government where the state is a subject of citizens’ will, people started to think in brand new ways. If one says education is a very low and inefficient way of making changes, why are there so many young people in the streets? Why do they feel that they have rights and obligations to challenge injustice and unfair systems?

For me being in Sweden and learning more about democracy, human rights, accountability and transparency of institutions is a process of feeling both upset and inspired.

It is depressing because the way Sweden works is not the way Belarus functions. Illegal detainment, fabrication of lawsuits, violence against activists, and violation of human rights are very usual part of life in Belarus, and it is not something people experience in Sweden.

The empowerment of education is a realization that this is wrong, this should not be happening, this is something we must fight back, something we must change. By raising our voice, by spreading information about our local contexts and using our privileges of being safe and secure in Sweden, we can contribute to a democratic change – and that is what inspired me.

Belarus is not Sweden. But one day it might be.