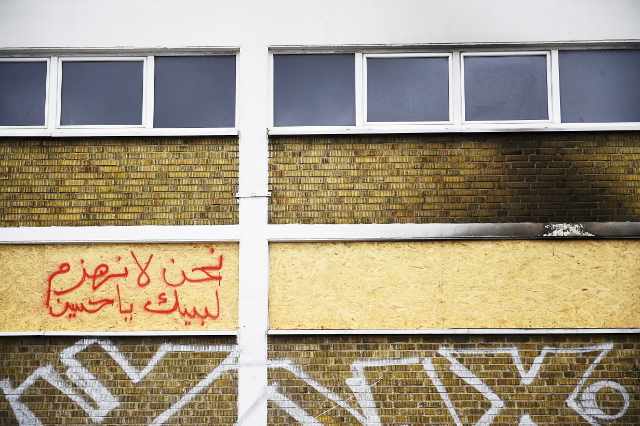 The man is accused of terror offences relating to damage caused to a Shia community centre in Malmö. Photo: Emil Langvad/TT

Chief prosecutor Agnetha Hilding Qvarnström alleges that the fire at a centre in Malmö owned by Shia Muslim organization Aldorr was started in order to spread fear in the name of Isis. No one was inured, but repair costs for smoke damage amounted to one million kronor ($113,000).

The 30-year-old man denies the charges, and his lawyer argues that the incident was not terror related and should instead be considered gross infliction of property damage.

“Either way, this was not a terrorist act,” defence lawyer Lars Edman told Malmö's district court.

The district court judged in a remand hearing last December that, contrary to the chief prosecutor's wishes, there was not enough evidence to consider the fire a terror incident, instead remanding him in custody on suspicion of arson. Last Monday however the prosecutor insisted that the man is affiliated with Isis and charged him with a “terror offence, alternatively arson”.

The charge sheet argues that “this arson could seriously have harmed the state of Sweden” and that the purpose of the attack was to “seriously intimidate a population group, in this case Shia Muslims”.

As the trial started on Friday, prosecutor Hilding Qvarnström read out extracts from conversations the accused had before before and after the fire.

“I came for jihad (…) Understand me, I am a soldier for them (Isis),” he told his mother, according to the extract.

His mother then called the plans “idiotic” and asked where he was going to carry them out.

The accused told the court that he came to Sweden with his wife in September 2015 because the country is “the first country which stands up for human rights” and he wanted to have stability in his life.

His family later suffered a car accident which led to the death of his young son. In an extract from another conversation read by prosecutor Hilding Qvarnström, the man is said to have told his cousin that he wanted “to die a martyr's death in order to rest”.

After the fire at the community centre last October, the man was contacted by several people, including representatives for a media organization linked with Isis, and was asked to explain what had happened.

“We want proof so that we can claim it if someone has been killed,” he was told.

“He and no one else was expected to provide information about the fire,” the prosecutor elaborated.

The 30-year-old's defence lawyer countered that the man has a keen interest in the media and is almost obsessed with what is happening in Syria. After the fire in Malmö he downloaded images of it that he found on news websites, which is why he was asked about the incident, the lawyer argued.

The man denies having anything to do with the fire.

Police could not find DNA evidence or finger prints linking the accused to the crime scene, but the prosecutor can prove using mobile phone tracking that he was present in the area around the time of the incident, and believes that is noteworthy:

“During the investigation it has been shown that he was moving in the area. I think his proximity is difficult to explain.”

The man insisted however that he was walking in the area after visiting his brother in law who lives nearby, and was on his way to the centre of Malmö in order to travel back to his home in northern Skåne.

The prosecutor's case is largely built on finds on the accused's computer, including an image of an Isis flag, pro-Isis propaganda movies, and Facebook conversations.

The trial will continue for two further days.