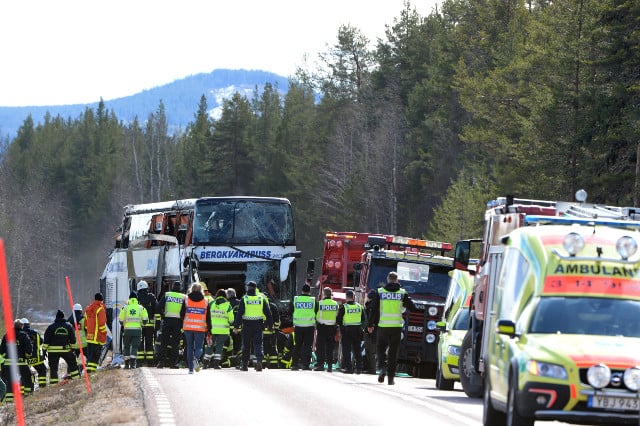 Emergency workers at the scene of the crash. Photo: Nisse Schmidt/TT

The bus carrying children en route to a skiing trip in Jämtland ran into trouble on the E45 road on Sunday. It had driven almost 600 kilometres overnight from Skene in southwest Sweden to Sveg in the north of the country.

“It was supposed to be a happy trip, one that they would remember for years,” said Fredrik Almqvist, whose daughter was on the bus.

The bus drove off the road at around 7am on Sunday. Most of the children were asleep, but Almqvist's daughter had woken up and put on her seatbelt. Other children were not as lucky.

One of the first to arrive at the scene was Gjermund Kristensen, a part-time fireman from Tandsjöborgs rescue centre, who had been called out with colleagues following a major alarm. He said he had been called out to accidents before, but nothing like this one.

The bus was lying in a ditch with its windows broken, and children who were conscious were helping to pull classmates out from the wreckage. Others were in shock and screamed or cried. Traces of blood could be seen on the snow.

As more emergency workers started to arrive those who were not seriously injured were comforted by personnel and given blankets. Kristensen praised teachers who were on the trip for stepping in and taking care of the children.

“The teachers should be given huge praise. This school should be happy to have such great teachers,” he noted.

Erik Sidenvall, a manager at the Härjedalen-Berg police, was also one of the first people to arrive at the scene. He explained that police are trying to map out how the children were sitting on the bus, and which kids had safety belts on or not.

At least 29 people from the emergency services worked on the accident. A rescue helicopter transported the most seriously injured to hospital from the scene. Sidenvall said the crash will leave a mark on everyone who witnessed it:

“Everyone has been injured in one way or another.”

Fireman Kristensen explained that the road is narrow and prone to accidents, and that even the slightest movement outside of the white boundaries can mean tyres are not on a flat surface.

Dad Almqvist thanked those who took care of his daughter, and said it was tough knowing that she only receiving minor injuries while other kids were not so fortunate.

“She has seen things that no adult let alone a child should see. She was lucky, she had a guardian angel. But three of her close friends are gone,” he lamented.

A sizable number of floral tributes and candles have been left at the school in Skene a day after the accident. Support is to be offered to any children who need it. Some of those who were not injured in the crash may choose to come to school on Monday, the manager of the local municipality's education department said.

“It could be that some of the kids who weren’t injured are already back. They can come to school. It’ll be a special situation. We'll see what they choose to do,” Kenny Fredholm told news agency TT.