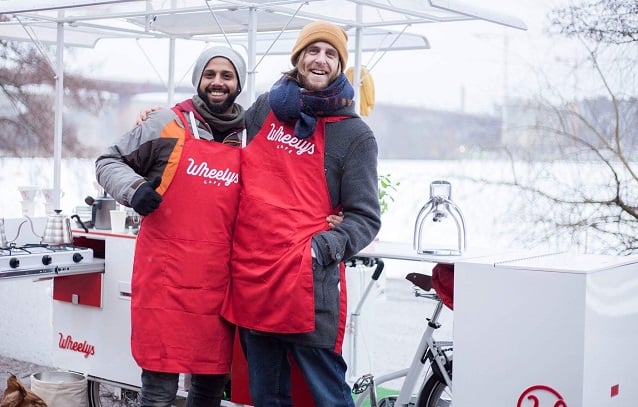 Wheelys Cafe Södermalm strives to be carbon neutral, getting its power from solar panels, recycling all its waste and even planting leftover coffee grounds as fertilizer. While Arquati is passionate about helping the environment, he also hopes the business will help build a community within his adopted city.

“In Sweden, people can be a bit stiff, and I've been in so many coffee shops where there's no culture of acknowledging the person two places back in the queue, or asking what people are up to each day,” he explains.

“But I think that especially on Södermalm (Stockholm's hipster haven island), people want vibrance. We have music playing, and we smile and chat to people – they appreciate our happiness!”

It's no wonder: the eco-entrepreneur has an infectious energy, whether talking about his previous job in childcare, politics, or the coffee he serves up.

“Every day, I see the early morning commuters with their heads down, looking miserable,” he says. “I was that person six months ago, and now I feel like I'm a real part of society, contributing – I'm even learning more Swedish each day.”

The Englishman makes an effort to pass on the cafe's ethos to customers, explaining the coffee's fairtrade origins and why they've chosen to be organic. “I find that Swedes are very conscious of how they treat their bodies and the planet, and they're interested in learning about these issues.”

On the other hand, he notes that Swedes tend to be reserved, meaning it can be a struggle to engage or feel like part of the community. This is not just a problem for new arrivals but also for established Swedes, he says, due to what can at times feel like a divisive political climate.

“Exaggerated media reports seem to have affected people recently; it can feel like people have become less open and trusting. But I'm out there every day on the streets where some people claim it's no longer safe to go – I mix with people from all walks of life, and I've had no problems.”

The business is comprised of Arquati and his partner Tomer Sharabi – “I'm the dreamer, he's more logical and keeps me in line!” – whom he met working at a preschool after first arriving in Sweden.

The move came after a “particularly wild weekend”, the entrepreneur says, when he decided to look for a change. “I had become a bar manager at 20 years old and felt like I'd 'made it', but after a couple of years, I just felt there had to be more to life than doing the same thing day-in day-out.”


The cafe can be found at Slussen on Södermalm Tuesday-Friday. Photo: Marcus Engman

He accepted a job offer in London and planned to move there, but decided to take a holiday to the Swedish capital first.

He never got on his flight back.

Despite quickly feeling at home with a group of friends and enjoyable job at the school, the Brit says he missed having a chance to engage with society, and began to suffer from feeling depressed, anxious and stressed.

That's when he came across Wheelys, a franchise which allows eco-entrepreneurs to set up their own mobile cafes at a far lower cost than it would take to set up a traditional store. Cafe owners have to serve 100 percent fairtrade coffee, but don't have to pass on any profit to Wheelys, leaving the bike itself as the only up-front cost.

“I'd actually never ridden a bike until I took up cycling after a break-up two years ago, so it shows that everything happens for a reason!”

But it was the fact he had managed to build a solid network of friends that convinced him it was the right time to try something new.

His business partner Sharabi quickly agreed to work with him, and Arquati comments that when he has hit problems such as a tyre puncture, he has always been able to call someone to come and help.

What's more, he says, “I think Sweden wants people to succeed – they encourage work-life balance and doing what's right for you. They give you support and options.”

Though the cafe has hit bureaucratic stumbling blocks, the duo have also received plenty of help from Swedish institutions, getting advice on creating a business plan, and funding for the first six months, from the Swedish Public Employment Service (Arbetsförmedlingen).

“Every single day I'm learning something new,” says Arquati. “Six months ago it seemed a bit overwhelming, but today we're so in control, we're comfortable with how it's gone so far. I've learned so much about coffee and am really proud of that!”


On a forest walk with friends. Photo: Ela Hauser

The coffee comes from another Swedish startup, Karma Coffee, which sources premium beans directly from Ethiopia, and passes on 50 percent of its profits to a charity there which focuses on empowering girls through exercise and sport.

READ MORE: Karma Coffee – the most Swedish startup on the planet?

“People appreciate the fact it's a super premium bean, so it's different from what you get at Starbucks and Espresso House,” the coffee-lover notes.

As for the future, the pair have “big plans”.

In the summer, the goal is to introduce live music and art exhibitions, as well as working at events.

And when winter arrives, Arquati hopes to find a way to move Wheelys inside, possibly by taking the bike indoors to Stockholm's shopping malls and setting up there.

“I'm not doing this to become hugely successful; for me it's enough if I just cover my rent each month, because we're doing it for ourselves and we're passionate about it,” he explains. “I'm the happiest I've ever been.”