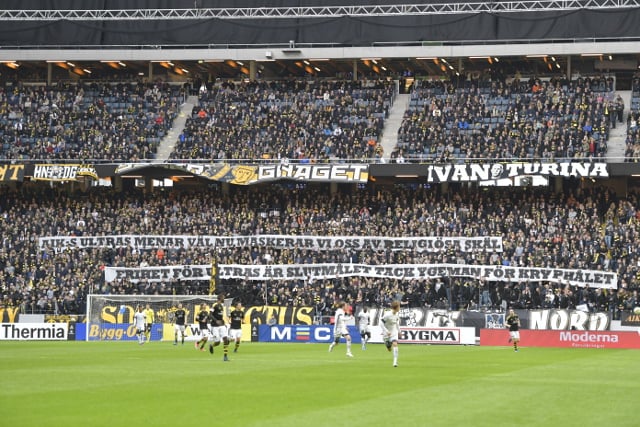 On March 1st, the ban on wearing masks in the stands at Swedish football stadiums entered into force in an effort to combat violent behaviour at games. Exceptions to the ban can be made however for people covering their faces in the line of duty like police, or people who cover their face for religious reasons.

And it was the latter exception that some supporters of Stockholm club AIK exploited during their Allsvenskan season opener against Häcken on Sunday. A number of ultras wore niqabs to the match at the Friends Arena.

Any doubts over whether it was done in protest were eliminated by the large banner supporters also held up, targeting minister for home affairs Anders Ygeman, who spearheaded the legislation.

“AIK's ultras mean well, we're now wearing masks for religious reasons. Freedom for ultras is the goal, thanks Ygeman for the loophole,” the banner read.

“In all honesty I thought the banner was quite funny. It shows that AIK fans have a bit of humour,” he told tabloid Aftonbladet.

The minister added that he doesn't expect niqabs to become a new trend among Sweden’s football ultras, and that if necessary, courts can make the distinction over whether someone was covering their face because of one of the exceptions to the rule or not.

The CEO of the Swedish Football League Mats Enquist told The Local that he didn't have anything to say about the protests except that “our supports have a well developed sense of humour” and “quick, easy solutions don't help complex problems”.

The mask ban came in response to serious problems at Swedish football matches, including a match between Jönköpings Södra and Östersund being abandoned in August 2016 after a masked supporter ran onto the pitch and assaulted Östersund goalkeeper Aly Keita.

READ ALSO: Mask ban 'a tool for police to stop those who are ruining the experience'

Swedish Football League CEO Enquist previously dismissed suggestions that it would be difficult for police to make a distinction over whether a mask had been worn for religious reasons or not.

“There has never previously been a problem identifying the difference between someone who has a religious reason to cover their face and someone who is doing so with the intent of committing criminal acts. In practice it’s very clear what the purpose is,” he told The Local in September.

As for AIK's season opener against Häcken, it seems the best of the action was in the stands: the game was a drab 0-0 draw.