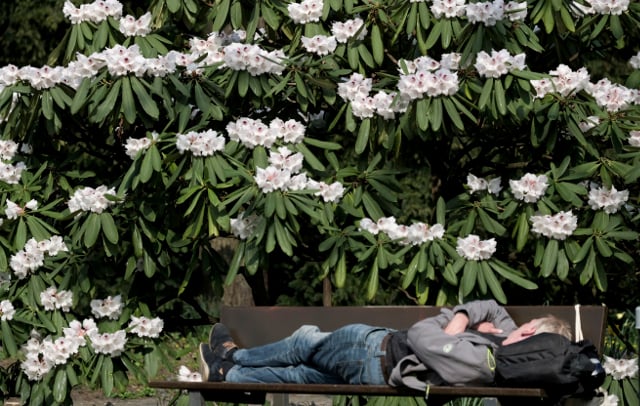 We're pretty sure we saw the sun at least once this week. Photo: Axel Heimken/AP

1. The bikes are back

Everyone knows at least one hardcore cyclist who sticks to two wheels even in the Swedish winter, but for most mere mortals bikes are packed away for at least a few months of the year in exchange for public transport.

When the spring arrives, that changes, as cycle lanes start to fill up and bells start to ring out once more. Shared bike schemes in cities like Stockholm and Gothenburg also start their season, meaning more casual cyclists are back out on the streets now that the weather is favourable. But if you think the bike lane is busy now, wait for the summer…

Daffodils are a sign of spring in plenty of countries, but at this time of the year the range of other wild flowers that start to pop up even in the middle of Sweden's cities is striking. Windflower, alpine pennycress and liverleaf (which is far nicer looking than it sounds) bring splashes of blue, purple and white to grassy areas, and windows start to fill with picked or bought flowers that help quickly eliminate any remaining memories of the grey winter. 3. Lunchtime in the city seems twice as busy

With the winter over and the snow finally gone from large stretches of the country, weekday lunch breaks become a time to rush out from the office to the nearest park, square or green spot and sit in the sun for a half hour or so instead of staring at four walls like you have been for the past six months.

Everyone else has the same idea of course, and Sweden's cities suddenly seem twice as busy. The best spots quickly become sought-after, particularly around midday.

4. Football returns to parks and stadiums

With the ground no longer frozen solid and the temperature mostly in the positive region, kids and adults kicking a ball around the local park is an increasingly common site once the winter is over. The sport also returns to stadiums, as hockey finally cedes ground to the other sport of choice in the Nordic country.

The top football leagues (the Allsvenskan and Damallsvenskan) both run a spring-to-autumn schedule, so the 2017 season is only now starting to kick off while many other European countries are approaching the business end of their schedules. If you haven't already, now is the time to pick a Swedish team to back. Swedes love a loppis (flea market) and progression into spring means it's time to gather all the junk from your storage space, throw it onto a table somewhere outdoors, and hope someone will pay you to take it off your hands and free up some space in the cellar for next year.

An extreme example is the Majorna Megaloppis (Majorna mega market) in Gothenburg, where 100,000 people turned up last May to have their fill of the junk on offer in the western city's hipster district.

Eating options also start to improve now thanks to the bigger street markets bringing food trucks and drinks vendors with them.  So you can grab a burrito or a kathi roll to go with your spring stroll instead of yet another boring sandwich.

In the Swedish capital the spring thaw means boats start to pop up all over the city's waterways as people bring them out from storage now that the risk of winter damage is over. The Mälaren feels like it's alive again: the noise of motors or the sight of kayaks confirm the season has changed.

In Gothenburg and Malmö meanwhile, tourists start to brave the canal boat tours previously rendered unappealing by the wind and rain as the boating season gets started.

It's getting warmer and the summer is just around the corner! When visiting Gothenburg a ride with Paddan is a must on a sunny day. #gothenburg #paddan #sun #summer #sweden #boat #sightseeing #beer #warm #swedishgirl #swedish #food #nature #city @paddan

It's a tough life being a bird in Sweden: frozen, harsh, and long winters mean half of the year is a hard slog, so the creatures act understandably chirpier once the sunnier days get going.

Look out for bushes filled with gråsparvar (house sparrows) bustling around hunting for food, or for the tiny birds jumping around near human legs in search of a scrap or two. Which brings us to… You'll be seeing more of these things in the coming weeks. Photo: Hasse Holmberg

Sweden's definition of weather appropriate for outdoor eating is a pretty generous one. Midday temperatures have been around the hardly Mediterranean-like 10-11 degree mark in Stockholm so far this week, but tables have already been put out in front of cafes and defiant Swedes have started to dine alfresco – between shivers and sniffles.

In truth, it won’t really be a particularly pleasant experience for at least a month or so, but this is spring in Sweden, dammit, and we eat outdoors. People have already started to use the outdoor seating at Medborgarplatsen in Stockholm. Photo: Emma Löfgren