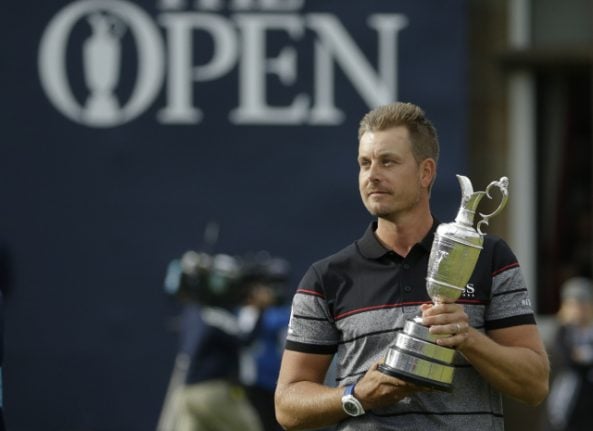 The first Swede to win the Open is playing his 12th Masters from Thursday but has never done well on a tough Augusta course.

“It is a very difficult golf course, especially if the wind is up, and most likely we'll encounter it on Thursday and Friday,” he said.

Asked whether victory here would count more for him than his British Open crown, Stenson said any win was welcome but some were more special than others.

“Being European, the Open Championship, being some of the first golf that I watched on television when I was a young kid….  that would maybe just be a little bit closer to my heart than any other one,” he said at a press conference.

All four majors were “wonderful”, he added, but he has established his own personal ranking.

“I would say, in my pecking order, if you want to have that one, I would probably go: (British) Open, Masters, US Open and PGA.”

The 40-year-old who lives in Florida, became the first Swede to win a major with victory by three shots over Mickelson in Scotland.

But he has had mixed fortunes since then and arrives at Augusta having missed the cut in his last two PGA tournaments, the Arnold Palmer Invitational at Bay Hill and the Houston Open.

“I guess that the previous couple of tournaments, I just haven't performed the way I would have liked to, which is negative in terms of building some momentum and confidence out on the golf course,” he said.

“But at the same time, I've been working trying to find that form and hit my shots better and putt better and everything else.”

His best Masters finish was a share of 14th place three years ago although he still relishes the memory of  leading for several holes during the first round in 2012.

“I've been here 11 times before and… it's the least successful major out of the four (for me),” he said.

“Yeah, I'm working hard on trying to make that turnaround and, again, if I could get a little bit closer this week, I'd be happy.”

“Hopefully I can still put it together this week.  I feel like it's not too far away and I'm certainly no worse off this year than I've been any other year coming in here.

“Yeah, that's why we're here.  We've got four days to figure out where we are.”

PARTNER CONTENT
Have an impact: five ways to shape a better world in 2022