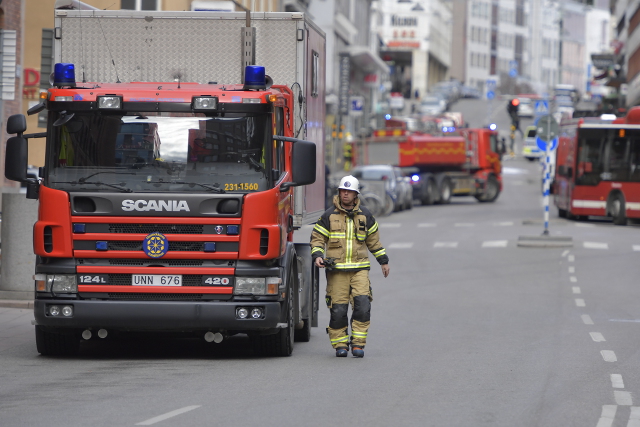 “Our thoughts are with the people of Sweden following the tragic events in Stockholm today. On behalf of the European Commission, I would like to send my sincere condolences to the families of the victims and to salute the courageous work of the first responders who arrived so quickly on the scene,” European Commission President Jean-Claude Juncker wrote in a statement.

“One of Europe’s most vibrant and colourful cities appears to have been struck by those wishing it – and our very way of life – harm. We stand shoulder to shoulder in solidarity with the people of Sweden and the Swedish authorities can count on the European Commission to support them in any way which we can.”

“An attack on any of our Member States is an attack on us all,” Juncker concluded.

Denmark’s Prime Minister Lars Løkke Rasmussen said it was a “day of sorrow”.

“It hurts all of our hearts that our Swedish kindred have been subjected to such an abhorrent attack. A cowardly attempt to suppress us and our peaceful way of life in Scandinavia,” the Danish PM's statement read.

“It is a day of sorrow. But it also a day of willingness, a willingness to fight the darkness,” he added.

European Council President Donald Tusk tweeted that his “heart is in Stockholm”.

My heart is in #Stockholm this afternoon. My thoughts are with the victims and their families and friends of today's terrible attack.

Belgian Prime Minister Charles Michel said his country believes “in the resilience of the Swedish people”.

Our thoughts go out to the victims and their families in #Stockholm. A sad day but we believe in the resilience of the Swedish people

“Shocked by the dreadful attack in the middle of Stockholm. Our kindred have been hit, and we are with you in your grief now,” Norwegian Prime Minister Erna Solberg also wrote on Twitter.

“France expresses its sympathy and solidarity to the families of the victims in Stockholm and to all Swedes,” he tweeted.

Spanish President Mariano Rajoy said Sweden “has Spain at its side”.

“I'm following the attack in Stockholm attentively. My condolences to the victims and I hope those injured recover. Sweden has us at its side,” he wrote.

“Your Majesty, please accept our deepest condolences for the tragic consequences of the terror attack in Stockholm. People in our country know from personal experience the horrors of international terrorism. In this difficult hour of suffering, Russians suffer together with the Swedish people,” Putin wrote according to Russian news agency Interfax.

“We condemn the violent attack in Stockholm today. Our sympathy goes to the families of the victims and all those affected and we wish the injured a prompt recovery. The United Nations stands in solidarity with the people and Government of Sweden. We hope that those responsible for the attack will be swiftly brought to justice.”