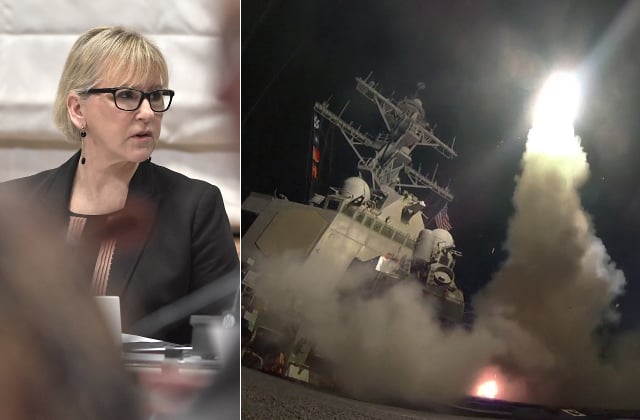 The US president ordered his forces to launch a missile strike on a Syrian air base in the early hours of Friday in response to a suspected chemical attack by the Syrian regime.

Wallström condemned the chemical attack, but urged the UN Security Council, of which Sweden is a non-permanent member, to seek a diplomatic solution to the conflict.

“The chemical attack against civilians in Syria is despicable. Under Swedish leadership, together with nine other countries on the security council, we tried to reach agreement on a resolution on a serious investigation of this atrocity to hold those responsible to acocunt. We regret that a consensus was not reached between the permanent members. We are ready to continue the work,” said Wallström in a written statement.

“It is unclear whether the missile attack last night is the new American policy. It is important that there is also an international legal basis for action. Last night's missile attack also raises questions about how this could be compatible with international law. The issue must therefore return to the security council, which must take responsibility to reach a lasting political solution. There is already too much military power in Syria. It is high time that the Syrian people get to decide their own future,” she said.

“After the chemical weapons massacre of April 4th on Khan Sheikhun in north-western Syria, a military installation of the Syrian regime was destroyed by a US air strike last night,” they said. “President Assad bears sole responsibility for this development.”

On Thursday the al-Assad regime, along with its ally Russia, rejected growing international accusations that Damascus was behind the chemical attack in which at least 86 people were killed.

Trump said that he was acting in America's “vital national security interest” in the hope of preventing further uses of chemical weapons.

German foreign minister Sigmar Gabriel said on Friday that the US air strike was “understandable”, but urged a political solution to the conflict.

“The fact that the United States has now reacted with a strike against military sites of the Assad regime, from which this cruel war crime was perpetrated, is understandable,” he said. “It was difficult to bear that the UN Security Council was unable to clearly and unequivocally respond to the barbaric use of chemical weapons against innocent people in Syria.”