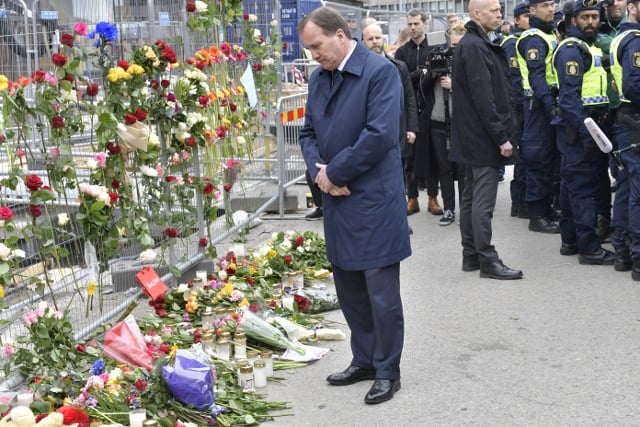 READ MORE: Our live report as the events unfolded on Friday

17:40: We are now closing the live report. Here is how the day's events unfolded:

17:05: In a speech broadcast on Swedish radio and TV, King Carl XVI Gustaf said his and the royal family's thoughts “go out to the victims of this abhorrent deed, fellow humans who have been injured and killed.” Photo: Jonas Ekströmer/TT
The King and Queen were in Brazil when they heard of the suspected terror attack on Friday, and immediately took the decision to return to Sweden, King Carl XVI Gustaf said.
16:10: National trains back on schedule
National trains are running on schedule again, train operator SJ has announced, although minor delays may occur. Several trains to and from Stockholm's Central Station were cancelled, and many departures were delayed, on Saturday morning, mainly due to trains and staff being in the wrong places following Friday's cancellation of services.
The Stockholm metro is running on schedule, although the Sergels Torg exit at T-Centralen remains closed as per police instructions, according to Stockholm's public transport company, SL.
The number 1, 54 and 69 inner-city buses have been redirected due to some central streets being closed for traffic.
16:00: Stockholmers are planning to honour the victims of the attack on Sunday at a gathering at Sergels Torg, just metres from the scene of the attack at the Åhléns department store. The Facebook event currently has 5,000 attendees, and 13,000 people have indicated they are 'interested' in attending.
15:15: Lawyer Johan Eriksson has been named as the 39-year-old suspect's public defender.
“I'm not defending the crime. I'm defending a person who is currently suspected of having committed the crime,” Eriksson told Aftonbladet.
Eriksson said he would meet with his client as soon as possible.
14:45: Prime Minister Stefan Löfven has cancelled his attendance at the Social Democrats' annual party conference, which takes place in Gothenburg this weekend. In a video message sent to the attendees, he said Friday was “a terrible day,” adding: “Sweden is in mourning.”

“Our country carries with it a force which no terrorist, no measly murderer, can take away from us,” Löfven said.

14:08: The police will not say if the suspect had a Swedish residence permit or not. They will also not comment on information circulating about the man having confessed he committed the crime.

When asked whether the suspected 'failed' or 'succeeded' in carrying out the attack, National Police Chief Dan Eliasson replied:

“We don't really know what his intentions were, and how many he intended to kill. But he obviously had evil intentions.” 13:50: Police have now confirmed previous reports that the man arrested is an Uzbek national. There is no information on how long he has been in Sweden. The Security police Säpo say they received information about him last year, but that it was of “marginal character”. They investigated the information and found no connections to extremism.

13:40: There have been reports that explosives were found in the truck. National police chief Dan Eliasson confirms at a press conference that “a device which did not belong there” was found in the car. “If that is a bomb or some other kind of combustible product we do not know.” Forensic teams are investigating it.

12:29: Faisal Khan witnessed the deadly truck attack in Stockholm yesterday, three years after his brother was killed by terrorists. He has shared his thoughts with us here.

READ MORE: 'We must not give in to hate and fear'

12:01: Nine adults and one child are currently in hospital, according to updated figures from Stockholm's health authorities. Four of those are seriously injured and the other six, including the child, have minor injuries.

11:25: Sweden's Crown Princess Victoria and her husband Prince Daniel have visited the scene of the attack to pay tributes to the victims.

A visibly moved Victoria, with tears in her eyes, said she felt great “sadness and emptiness”. But she added that she still felt a certain strength. “Society has shown tremendous power and that we are resisting this, that we want to resist this. That we are united. That the Swedish society is built on tremendous trust and community. We will go stronger out of this in some way,” she told Aftonbladet.

Asked by the reporter how Sweden would move on, she replied: “Together.” 10:43: Swedish flags are flying at half mast today. A condolence book is available at Stockholm City Hall, Ragnar Östbergs plan 1, for those wishing to leave their condolences. A Swedish flag at half mast at the government headquarters Rosenbad on Saturday. Photo: Jonas Ekströmer/TT

10:20: Mayor of Stockholm Karin Wanngård is on the scene in Drottninggatan paying tribute to the victims of the attack.

“This is an attack on society, on Stockholm and on the Stockholmers,” Wanngård told TT.

Karin Wanngård said Stockholm has shown a united front through the hashtag #openstockholm, under which Stockholmers invited people affected by the attack into their homes.

“It's incredible,” she said.

10:14: Police sources have told Swedish Television (SVT) a homemade bomb has been found in the truck used in the attack. The bomb did not go off, but the suspect received burns from it, according to SVT.

10:00: Deputy Prime Minister Isabella Lövin and Education Minister Gustav Fridolin, both of the Green Party, leave flowers on the scene where the attack took place on Friday. 9:30: A man who was arrested in the northern Stockholm suburb of Märsta on Friday is being held by the police suspected of committing a terrorist crime by murder. He matches the description of the man shown in CCTV footage released by the police shortly after the attack.

The arrested man is a 39-year-old from Uzbekistan, report Aftonbladet and Swedish Radio.

Fifteen people, two of whom were children, were injured in the attack and were taken to hospital. Early on Saturday morning the Stockholm county council said nine people were still being treated for their injuries.

One of the two children has left hospital, while the other is still being treated. The Stockholm county council chief physician would not comment on the state of those still remaining in hospital.

The police have made several raids on different locations in Stockholm throughout the night. Several media reported that an arrest was made in connection with a raid in Hjulsta north of Stockholm, but the police would not confirm this information.

“The mission has been going on in several different locations with different measures that cannot be described in detail at present,” said police spokesperson Towe Hägg.

The truck used in the attack was towed away in the early hours of Saturday. Flowers in the corner of Hötorget/Kungsgatan. Photo: Anders Wiklund/TT

Drottninggatan, the pedestrian street where the attack took place, largely remains closed, and people have started leaving flowers by the police cordons to honour the victims.

Sweden's terror threat level remains at three on a five-level scale, meaning there is an elevated threat. Within the scope of this threat level, a terrorist attack is possible.