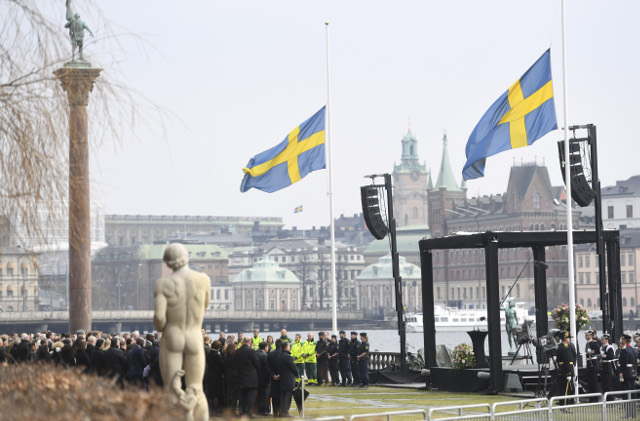 As it no doubt was for many people in the city, it felt impossible to shake the previous day’s events from my mind. I lived in Glasgow when two men attempted to ram the local airport with a Jeep loaded with propane canisters, and I lived in London when Fusilier Lee Rigby was brutally murdered, but those two horrible events didn’t create the same twisting feeling in the pit of my stomach as the one that developed once I finally started to process the events of last Friday, 24 hours later.

Most probably because of how close to home it happened. The truck attack in the Swedish capital unfolded in what must be the busiest street in the city, a place most here will likely have walked down at least once in the last week, and a place my partner had been earlier on Friday afternoon for a work errand.

It felt right to act, and do what thousands of others chose to do by paying a simple tribute to those hurt, so on Saturday evening we decided to buy flowers and leave them near the scene. By pure coincidence, we arrived at the intersection of Drottninggatan and Klarabergsgatan just as police were taking away cordons, shortly before 10pm. The floral tributes have now been moved to Sergels Torg square and added to. Photo: Christine Olsson/TT

After adding our small item to a wall of floral tributes of a size I have never seen before, we instinctively started walking up the street. Acknowledging what had happened and grasping it tangibly by seeing it for ourselves felt necessary, as it evidently did for many others who decided to do the same. I have never seen Drottninggatan so busy at 10pm on a Saturday night – this is a street that is at its most crowded during the day.

It may sound absurd, but what they don’t tell you about these kind of attacks is that just because the police are done with the scene doesn’t mean the traces are instantly cleared up. The sight of tyre tracks zigzagging across the boulevard created a lurching sensation that I had to fight my brain from elaborating upon. Stone bollards with chips missing from them, signs lying on the ground that had been knocked off by the vehicle, and the odd trace of red on the ground only added to those troubling thoughts. There was even a blanket used by emergency services staff still on the ground, covered in floral tributes and candles.

I won’t forget any of that any time soon, but those aren’t the things that really stick in my mind going forward. Rather, it was moments like watching a group approaching two police officers, saying ‘thanks’, shaking their hands and handing them flowers. Which the officers eventually bashfully accepted. A similar moment unfolded at the memorial service on Monday, as the early-comers gave an impromptu round of applause to officers. Stockholmers thanked police by covering some of their vehicles with flowers. Photo: Christine Olsson/TT

Confidence in Sweden’s police hasn’t necessarily been at its highest recently, but their impeccable response to the attack will have challenged previously held opinions. Many people I have spoken to in the aftermath have expressed how impressed they were with the speed at which the emergency services mobilized, and the sense of preparedness and security that created. Perhaps the positivity towards them, exemplified by the blankets of flowers lain on police cars in recent days, can mark a turning point.

READ ALSO: 'Stockholm will remain an open and tolerant city'

What will also stay with me is observing how one unknowing instigator walked up to the newly accessible wall of the Åhléns department store on Saturday evening, took a pen and wrote “together we are stronger” on the plywood covering its damaged façade. Then how others instinctively followed and added further positive messages and tributes. It has now developed into an incredible tribute wall covered in writing and notes. A more permanent memorial will no doubt follow, but a more fitting one is not possible: the spontaneous outpouring of respect, love and sorrow summed up the mood in the city perfectly. Messages on the wall where the truck crashed. Photo: Markus Schreiber/AP

Then there was the instant mobilization of everyday Stockholmers on Friday night, as people used #OpenStockholm to offer shelter and food to random strangers who were stranded in the city due to the shutting down of the transport network. Everyone here will likely know at least one person who reached out a hand to a stranger or a colleague. Sadly, most will also know someone who was a friend of a victim, or a victim themselves. You are rarely more than a couple of degrees of separation from another person in the still relatively small Swedish capital.

So along with the inevitable sadness, what last weekend has created for me is a feeling of hope, not to mention a feeling of pride in the city I live in. Part of the reason why I live here in the first place was a desire to escape the disillusionment I felt with my home country, and a suspicion that Sweden better fit my values. Those suspicions have been confirmed in the last few days: Sweden’s response to something horrific has been to show how inherently good so many of its citizens are. I have never felt more like a Stockholmer than I do now.