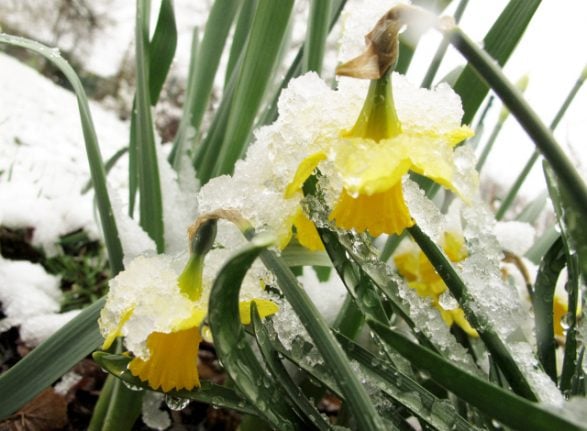 Sweden's national weather agency SMHI on Thursday morning issued a warning of snow for the Dalarna and Värmland regions in central Sweden.

It predicts some 5-10 centimetres of snow could fall in the area between Thursday evening and Friday noon, or even up to 15 centimetres in some places.

According to SMHI some snow may also fall in the southern Götaland region late on Thursday and in western parts of central Sweden late on Friday and Saturday morning, which could make the roads slippery. Snow is also expected in parts of northern Sweden, but nothing out of the ordinary for the time of the year.

The long Easter weekend (Good Friday and Easter Monday are both so-called 'red days' in Sweden, and many also get Maundy Thursday off) is one of the busiest traffic weekends of the year, with tens of thousands of Swedes travelling home by car to visit their relatives.

“Patience, patience and patience,” Bengt Olsson of the traffic authority advised when quizzed by TT.

The cold weather is likely to stick around for a while past the Easter holidays.

“I guess the winners are the mountain enthusiasts who like wintery conditions. The Lapland mountains in particular could be nice when the sun comes out. But it is not going to be warm and that is not going to change next week,” meteorologist Johan Groth of the weather institute Storm told the Expressen tabloid. Easter witches. Because why not? Photo: Ulf Lundin/imagebank.sweden.se