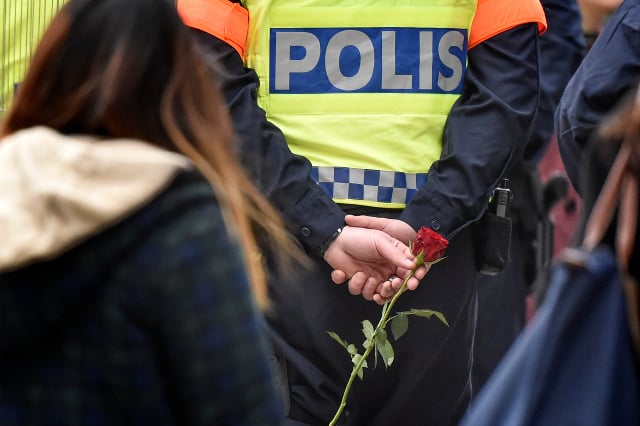 Police have received praised for their work after the terror attack. Photo: Noella Johansson/TT

Just a few hours after the truck attack, two police officers in Täby, named only as Emma and Alex, received a call-out to the suburb of Märsta, 40 kilometres north of Stockholm, after a witness reported seeing a man who matched a CCTV image released by police earlier in the evening.

“I had it in the back of my mind that it could be that terrorist, but they only sent one patrol and that was us,” Emma told the Aftonbladet tabloid.

She said the witness had followed the man in his car but was afraid to go any further, so the officers kept driving. After a kilometre, and just before 8pm, she and Alex spotted a man walking on the side of the road.

“Alex drives up on the footpath behind the person and I get out while the car is still rolling. The person then turns around and when he realizes it's the police he flinches,” Emma told Aftonbladet.

She immediately recognized the man from the CCTV images and knew she had to act quickly.

“I get him down on the ground and get him handcuffed. Then Alex comes.We understand pretty much immediately that it most likely is the right person. He starts shouting in a foreign language.”

“He never understood what was happening. We got him down on the ground that fast.”

They called for backup and Akilov was soon taken into custody.

“It was good to catch him, for the sake of the public and the police, well, for the sake of everyone, really. But the big hero is the man who drove after him and raised the alarm. He should get a medal. Such an incredibly brave thing to do,” said Emma.

As for her and Alex, they continued their shift as normal.

“We went to a suspected shooting in Åkersberga and around three hours later I performed CPR on a woman in Vallentuna. It was a completely ordinary night.”

“It wasn't until later on Saturday we thought 'what the hell happened?'”

Akilov on Tuesday confessed to a “terrorist crime” for the truck attack that killed four people and injured 15 others on Friday. Four people remain in hospital, two of whom are seriously injured.